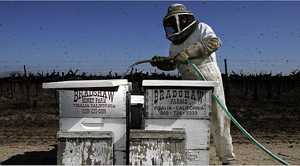 Isaias Corona of Bradshaw Honey Farm, near Visalia, Calif., putting corn syrup — bee food — into hives. The farm has lost about half its bees.

VISALIA, Calif., Feb. 23 — David Bradshaw has endured countless stings during his life as a beekeeper, but he got the shock of his career when he opened his boxes last month and found half of his 100 million bees missing.

In 24 states throughout the country, beekeepers have gone through similar shocks as their bees have been disappearing inexplicably at an alarming rate, threatening not only their livelihoods but also the production of numerous crops, including California almonds, one of the nation’s most profitable.

“I have never seen anything like it,” Mr. Bradshaw, 50, said from an almond orchard here beginning to bloom. “Box after box after box are just empty. There’s nobody home.”

The sudden mysterious losses are highlighting the critical link that honeybees play in the long chain that gets fruit and vegetables to supermarkets and dinner tables across the country.

Beekeepers have fought regional bee crises before, but this is the first national affliction. 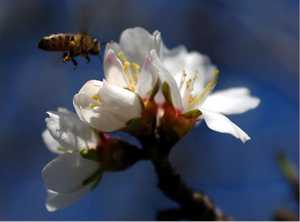 A honeybee collects nectar from an almond tree in bloom.

Now, in a mystery worthy of Agatha Christie, bees are flying off in search of pollen and nectar and simply never returning to their colonies. And nobody knows why. Researchers say the bees are presumably dying in the fields, perhaps becoming exhausted or simply disoriented and eventually falling victim to the cold.

As researchers scramble to find answers to the syndrome they have decided to call “colony collapse disorder,” growers are becoming openly nervous about the capability of the commercial bee industry to meet the growing demand for bees to pollinate dozens of crops, from almonds to avocados to kiwis.

Along with recent stresses on the bees themselves, as well as on an industry increasingly under consolidation, some fear this disorder may force a breaking point for even large beekeepers.

A Cornell University study has estimated that honeybees annually pollinate more than $14 billion worth of seeds and crops in the United States, mostly fruits, vegetables and nuts. “Every third bite we consume in our diet is dependent on a honeybee to pollinate that food,” said Zac Browning, vice president of the American Beekeeping Federation.

The bee losses are ranging from 30 to 60 percent on the West Coast, with some beekeepers on the East Coast and in Texas reporting losses of more than 70 percent; beekeepers consider a loss of up to 20 percent in the offseason to be normal.

Beekeepers are the nomads of the agriculture world, working in obscurity in their white protective suits and frequently trekking around the country with their insects packed into 18-wheelers, looking for pollination work.

Once the domain of hobbyists with a handful of backyard hives, beekeeping has become increasingly commercial and consolidated. Over the last two decades, the number of beehives, now estimated by the Agriculture Department to be 2.4 million, has dropped by a quarter and the number of beekeepers by half.

Pressure has been building on the bee industry. The costs to maintain hives, also known as colonies, are rising along with the strain on bees of being bred to pollinate rather than just make honey. And beekeepers are losing out to suburban sprawl in their quest for spots where bees can forage for nectar to stay healthy and strong during the pollination season.

“There are less beekeepers, less bees, yet more crops to pollinate,” Mr. Browning said. “While this sounds sweet for the bee business, with so much added loss and expense due to disease, pests and higher equipment costs, profitability is actually falling.”

Some 15 worried beekeepers convened in Florida this month to brainstorm with researchers how to cope with the extensive bee losses. Investigators are exploring a range of theories, including viruses, a fungus and poor bee nutrition.

They are also studying a group of pesticides that were banned in some European countries to see if they are somehow affecting bees’ innate ability to find their way back home.

It could just be that the bees are stressed out. Bees are being raised to survive a shorter offseason, to be ready to pollinate once the almond bloom begins in February. That has most likely lowered their immunity to viruses.

Mites have also damaged bee colonies, and the insecticides used to try to kill mites are harming the ability of queen bees to spawn as many worker bees. The queens are living half as long as they did just a few years ago. 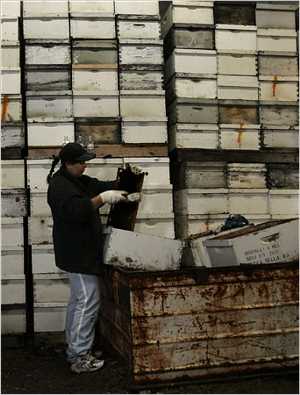 Researchers are also concerned that the willingness of beekeepers to truck their colonies from coast to coast could be adding to bees’ stress, helping to spread viruses and mites and otherwise accelerating whatever is afflicting them.

Dennis van Engelsdorp, a bee specialist with the state of Pennsylvania who is part of the team studying the bee colony collapses, said the “strong immune suppression” investigators have observed “could be the AIDS of the bee industry,” making bees more susceptible to other diseases that eventually kill them off.

Growers have tried before to do without bees. In past decades, they have used everything from giant blowers to helicopters to mortar shells to try to spread pollen across the plants. More recently researchers have been trying to develop “self-compatible” almond trees that will require fewer bees. One company is even trying to commercialize the blue orchard bee, which is virtually stingless and works at colder temperatures than the honeybee.

Beekeepers have endured two major mite infestations since the 1980s, which felled many hobbyist beekeepers, and three cases of unexplained disappearing disorders as far back as 1894. But those episodes were confined to small areas, Mr. van Engelsdorp said.

Today the industry is in a weaker position to deal with new stresses. A flood of imported honey from China and Argentina has depressed honey prices and put more pressure on beekeepers to take to the road in search of pollination contracts. Beekeepers are trucking tens of billions of bees around the country every year.

California’s almond crop, by far the biggest in the world, now draws more than half of the country’s bee colonies in February. The crop has been both a boon to commercial beekeeping and a burden, as pressure mounts for the industry to fill growing demand. Now spread over 580,000 acres stretched across 300 miles of California’s Central Valley, the crop is expected to grow to 680,000 acres by 2010.

Beekeepers now earn many times more renting their bees out to pollinate crops than in producing honey. Two years ago a lack of bees for the California almond crop caused bee rental prices to jump, drawing beekeepers from the East Coast.

A typical bee colony ranges from 15,000 to 30,000 bees. But beekeepers’ costs are also on the rise. In the past decade, fuel, equipment and even bee boxes have doubled and tripled in price.

The cost to control mites has also risen, along with the price of queen bees, which cost about $15 each, up from $10 three years ago.

To give bees energy while they are pollinating, beekeepers now feed them protein supplements and a liquid mix of sucrose and corn syrup carried in tanker-sized trucks costing $12,000 per load. Over all, Mr. Bradshaw figures, in recent years he has spent $145 a hive annually to keep his bees alive, for a profit of about $11 a hive, not including labor expenses. The last three years his net income has averaged $30,000 a year from his 4,200 bee colonies, he said.

“A couple of farmers have asked me, ‘Why are you doing this?’ ” Mr. Bradshaw said. “I ask myself the same thing. But it is a job I like. It is a lifestyle. I work with my dad every day. And now my son is starting to work with us.”

Almonds fetch the highest prices for bees, but if there aren’t enough bees to go around, some growers may be forced to seek alternatives to bees or change their variety of trees.

“It would be nice to know that we have a dependable source of honey bees,” said Martin Hein, an almond grower based in Visalia. “But at this point I don’t know that we have that for the amount of acres we have got.”

To cope with the losses, beekeepers have been scouring elsewhere for bees to fulfill their contracts with growers. Lance Sundberg, a beekeeper from Columbus, Mont., said he spent $150,000 in the last two weeks buying 1,000 packages of bees — amounting to 14 million bees — from Australia.

He is hoping the Aussie bees will help offset the loss of one-third of the 7,600 hives he manages in six states. “The fear is that when we mix the bees the die-offs will continue to occur,” Mr. Sundberg said.

Migratory beekeeping is a lonely life that many compare to truck driving. Mr. Sundberg spends more than half the year driving 20 truckloads of bees around the country. In Terra Bella, an hour south of Visalia, Jack Brumley grimaced from inside his equipment shed as he watched Rosa Patiño use a flat tool to scrape dried honey from dozens of beehive frames that once held bees. Some 2,000 empty boxes — which once held one-third of his total hives — were stacked to the roof.

Beekeepers must often plead with landowners to allow bees to be placed on their land to forage for nectar. One large citrus grower has pushed for California to institute a “no-fly zone” for bees of at least two miles to prevent them from pollinating a seedless form of Mandarin orange.

But the quality of forage might make a difference. Last week Mr. Bradshaw used a forklift to remove some of his bee colonies from a spot across a riverbed from orange groves. Only three of the 64 colonies there have died or disappeared.

“It will probably take me two to three more years to get back up,” he said. “Unless I spend gobs of money I don’t have.”
Alexei Barrionuevo