Central Asian beekeeping
Central Asian natural conditions are extremely diversified. It is composed of plains, deserts and high mountains (Tian Chan, Pamir), which continue up to the Himalayan chain itself.

You will find there huge unpolluted spaces, with lots of nectar plants, conditions which are ideal for beekeeping. The major honey producers of the area are Kirghizia, Uzbekistan, Tadjikistan and the south of Kazakhstan.

During the Soviet times, beekeeping was very well developed, and organized within a framework of State structures. However, private beekeepers were permitted to have their own honey production and to sell it for their own profit, which was highly appreciated at that time.

Because of it, there is a long tradition of beekeeping in Central Asia, and the most qualified local beekeepers are even capable of really complex operations like queen breeding etc. This story led to real beekeepers dynasties, like for instance this family shown below, from the Fergana valley, which operates a total of 4,000 hives. 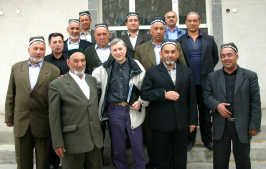 Lots of beekeepers are still private individuals, producing honey with a few hives and for their own family needs. Besides, professional beekeepers operate in general from 150 to 300 hives. They practice transhumant beekeeping, moving trailers where hives are fixed on a permanent basis.

The most widespread bee stock in Central Asia is Apis mellifica carnica, of Carpathian ecotype. It is very well adapted to the local environmental conditions, including to the extremely heavy temperature fluctuations. 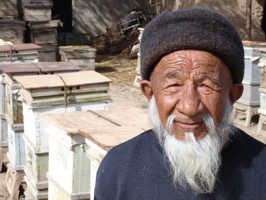 Beekeeping trailers are of two types, either the open type or closed wagons
Closed wagons offer particularly good working conditions: beekeepers perform their operations from the inside of the wagon, in general with an integrated extractor. Beekeepers themselves live also inside one of the wagons.

Beekeeping season depends on local climatic conditions: southern areas, close to the Afghan border may start in March, earlier than others, which usually start in April. 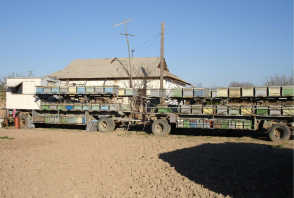 In spring, beekeepers start moving to one or sometimes to a few wild areas. If we consider for instance the central Uzbekistan area (Samarkand, Jizzak), beekeepers start moving to the Kizilkum desert and then to the mountains located in the north of Samarkand. The Kirghiz and the Uzbeks of the Fergana valley (Fergana, Andijan, Osh) already leave for the Kirghiz mountains as early as April/May. Then, in July, everybody comes back to the valley because this is the start of the cotton season which will last till the end of September. 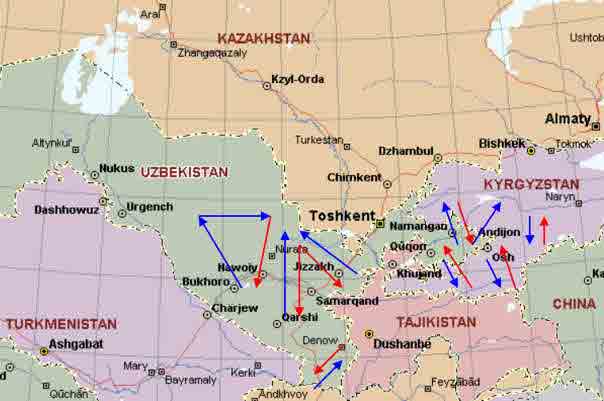 This approach means that for half of the season, beekeepers operate far from any towns, industries or industrial crops. Therefore, with a few minor changes in the production process, this honey will be ready for a qualification as organic honey.

The major problem faced by Central Asian beekeepers today is the marketing of their products. At the time of the Soviet Union, this question was handled by the State, notwithstanding private family sales. Today nobody took its place, export sales are only performed through Cenasco and a few Turkish or Russian smugglers exporting honey illegally. Beekeepers have only the solution of selling their honey on a very small scale on the local markets and if possible, try to do barter with their own suppliers.

When Cenasco appeared as a firm buyer on the markets, after an initial apprehension period, beekeepers started to modify their behaviors because, for the first time since the collapse of the Soviet Union, they were foreseeing possibilities for regular sales in the long run. In particular, they started to be much more careful in using drugs in their hives. However, their low level of production and the lack of financial means, for instance to buy highly productive queens, has still a very negative impact on their productivity and of course on their costs.

Central Asian honeys
We consider that it is today impossible to give serious production figures for the area. Extremely unrealistic figures are shown from times to times, without any possibility of crosschecking. However, we can say that in each of these countries (Uzbekistan, Kirghizia, Tadjikistan and the south of Kazakhstan) there is a confirmed output of a few thousand tons of honey. Today the only country which obtained a European agreement for honey imports into the EU is Kirghizia. Uzbekistan is also working on this issue.

This honey represents about 50 % of the total regional output.

It is worth mentionning that cotton crops, which had been drowned under pesticides at the Soviet times, became today totally clean. This does not come from ideological reasons but simply because they are too expensive. They have been replaced by a very inexpensive way of fighting against cotton parasites: in every village they breed small butterflies which are the natural predators of cotton worms. Therefore there are no longer any contamination of the cotton honey by chemicals.

Cotton honey is a creamy honey of light amber colour (about 17 to 35 mm) with a mild, pleasant, flowery taste, without excessive acidity

The remaining 50 % of the total output are represented by a few uniflor quite specific honeys and polyflor wild flowers honey, which comes mostly from the Kirghizian mountains, like this one, light and creamy.

Pungent durable bush. It can be found in the Kizylkum desert, among other places.

Durable herb, used in the treatment of the vitiligo.

Snow-white, quite mild, quite pleasant, flowerish honey (in general lower than 10 mm), no bitter taste.

It is worth mentionning that in general the whole region is very dry, especially the plains and the deserts. This is reflected in the low humidity rate of Central Asian honeys (only 16 to 17 %!).

All this seems to draw an ideal picture of the local beekeeping situation. However, this has to be precised: the local exogenous conditions of beekeeping are excellent, but sometimes local practices may create some problems (e.g. the use of antibiotics for prophylactic purposes). Analysis may show an inacceptable level of prohibited substances. Therefore, we recommand a very careful approach. The use of sugar remains however at a quite acceptable stage (5 kg to feed a hive for a whole year). We did not meet any case of adulteration. 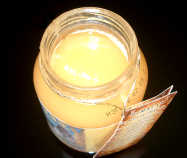