Varroa Mites and how to catch them - Here is the method used to kill 95% of the varroa mite in a hive (1999)
This method is developed by Johan Calis*, Joop Beetsma*(died in Marz '99), Willem Jan Boot*, Jan van den Eijnde**, Aad de Ruijter** and Sjef van der Steen**
* University Wageningen, The Netherlands, Entomology
** Bee and pollination research institute AMBROSIUS HOEVE, Hilvarenbeek, the Netherlands.

We call it the Darreraat methode. "Drone comb method"
It looks like a very labor intensive method, but when you really look at it except for the one week before implementing the swarm prevention program wherein you give all the brood from one hive to another hive, the rest is pretty much a normal swarm prevention split. Also, Varroa mites may eventually become resistant to Apistan and other Mite Solutions, and then what? AND the accumulation of it in HONEY, WAX, PROPOLIS. (you never get it out!)

Trapping comb methods are in general more labor intensive compared to acaricide treatments. The integration of trapping comb methods and swarm prevention, largely disposes of this disadvantage. In fact, the extra labor consists only of management of the drone combs and may well be exceeded by the advantage of producing bee products that are free of acaricide residues.

Here in Europe there is a famous beekeeping book called " The week-end beekeeper". Seems like it is written for this method.

Introduction
Varroa mites are most often found in drone brood. Capturing mites in drone brood is nothing new. In fact, it was the first method used to combat the mites. But since not all mites were captured and many survived in the worker brood, this method was relatively ineffective and other methods were employed.

Varroa mites propagate in brood cells. Research from the University of Wageningen (The Netherlands) has shown that the Varroa mites are 12 times more likely to enter drone cells versus worker cells. Therefore, If a situation is created wherein all of the mites are on the bees (and not in any brood) it is possible to catch a high percentage of the mites with a couple of drone cell brood frames. Capturing mites in broodless hives with drone cell frames is very effective. A broodless period is essential to this method since the mites, all on the bees, will be caught in the drone cells. This principle is used in biotechnical mite control methods.

An Overview of the Drone Comb Method
Catching mites in early springtime;
During the first spring inspection, a frame with drone cell foundation is placed in the middle of the brood nest. This frame is removed when the majority of the drone cells are capped. Before the swarm season, one drone brood frame should always be present in the hive. This way the drone brood frame will be quickly built and mite infestation is checked. According to research from The University of Wageningen, it appears that the mite population will be stable at this point, and not be able to grow.

Catching mites during the swarming season
In this method sequence, we will work with two hives. There is also a one hive sequence The actions will include creating a broodless period on one hive and swarm prevention split on the other hive. The result will be three relatively swarm proofed mite-free hives.

At the moment hive 2 gets the brood of hive 1, one drone cell frame is put in the middle of the old queen's broodnest and a queen excluder in between the hive bodies. After one week it will be easy to make an artificial swarm without any brood, using the old queen, the bees of 6/7 frames, and the drone frame. When this drone frame is capped, removed and cleaned, the fight on the varroa in the artificial swarm hive is finished.

Since Hive 2 is left queenless, a new queen will be raised since brood in all stages were present. This may be a great opportunity to requeen or you can let them raise a new queen. During the remaining weeks Hive 1 will supply this hive with "egged / lavaed" drone frames. Two egged drone frames are moved from hive 1 to hive 2 (one week between them). As those frames are closed, removed and cleaned, the fight on the varroa in hive 2 is finished off.

The method
Condition of the successful use of the method

Description of the method in sequential parts

a) During April, inspection takes place.

b) Strong hives have to be made by combining two small hives.

2) Put in, control and cleaning of the drone frames

c) In testing, it appears that most of the drone cells were built and capped after two weeks. Sometimes it takes longer. It is good to remember: drone >>> 3 days, egg >>7 days, larva >>14 days, pupa.

d) There are three stages you could find on the drone frame.

e) Estimate/count the closed drone cells. It's good to write the stage of the broodcells development on the hive protocol chart. Keep good records!

f) How do you remove the larva and pupa from the capped frames? A good method is this: Uncap the cells with a serrated knife or your normally used honey uncapping tool, thrust the larva out. (it is good to mix the drone larva with the chicken feed, they love it!!)( but our teacher talks about eating them!! Ask him for a recipe, he will be angry with me) Clean the cells with water, dry it in the air, use it again. Remains of pupae should be washed out of the comb with a jet of water and the drone combs should be stored dry until reuse, to prevent growth of fungi.

3) The catching of the mites in the early springtime

4) Catching the mites in the swarm season

Week 0
One week before the swarm protection starts, a cleaned out drone frame (A) is put in hive 1. Depending on the development of the already present drone frame, there are now a maximum of two drone frames in the hive. It is important that the last frame in (A) gets "egged" so place it in the middle of the broodnest. It is good to have an egged drone frame present in case a swarm would have to be hived. With the egged / lavaed drone frame you can catch the mites from a swarm.

Week 1
Capped honey can be harvested (hope so :-))

* Normally in Holland we use the technical term "veger" or "vlieger" for an artificial swarm. Here's an explanation:

"Vlieger" >>>[literally=flyer] The hive with the queen first gets moved to a new location (only a few meters.) Set a new hive at the original (old) location with normally two frames of bias (except when using this Method.) After a half hour the queen -easy to find when all the flying bees are already back to the original location-is placed to the old location. The returning field bees will accept the new hive as their home. Queen cells will become on the new place with only the housebees. (They needs food!!!! and a very little entrance to protect against robbing)) The queen gets put back on the old place with all the flying bees. 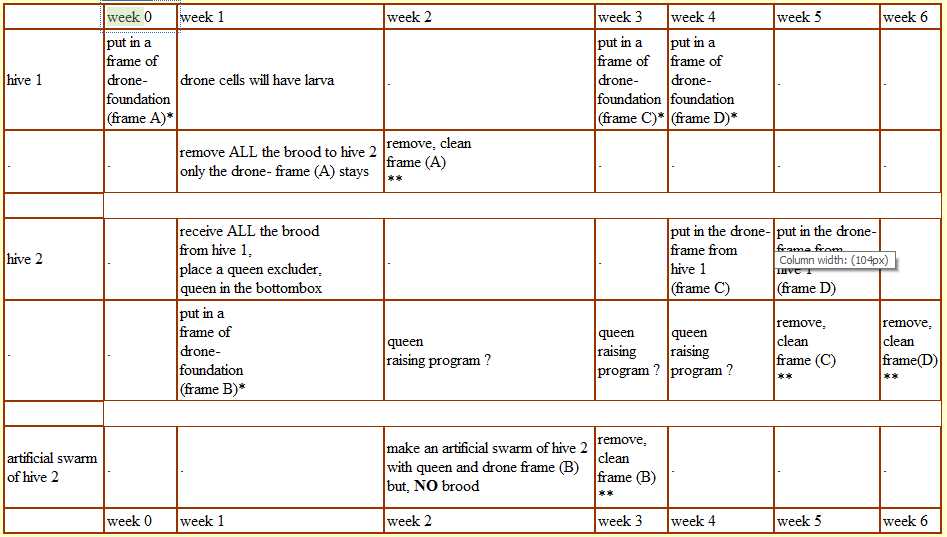 * When the honeyflow is on, put it down in the broodnest, otherwise the bees will store the nectar in the cells.
If the flow is normal than the droneframe comes in the upper broodbox, in the middle of the brood.
*/** Frame A will become frame C; frame B will become frame D

7) Control of the effectiveness

Hive 1 and the artificial swam
A hive with one kg (2.2 lb..) bees (+/- 7 broodframes with bees) can effectively be stripped of varroa mites with 500 drone cells, a hive with 5 kg (11 lb..) bees need 2500 cells. In practice, this means that the war on the mites in a swarm is effective with 500 closed drone cells. In hive 1, the largest percentage of the mites are going to hive 2 because of the change of the total brood. The mites on the bees will be caught by the remaining drone frame.

Hive 2
Here, the last two frames that are "egged/larvaed" in hive 1 and capped in hive 2, are the most essential for the effectiveness of the method. If 2000 drone cells are capped, the mite problem is settled. If that number is not reached, then it is necessary to put drone frames in until the new brood of the new queen will be closed. The effectiveness must be determined by counting the capped drone cells.

8) Control on the end of the season

No copyrights -. Everything is free to distribute by all media, without permission of the authors. But they are happy when they are mentioned in the source.
Realization: Jan Tempelman