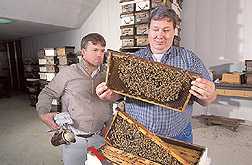 After removing a frame of bees from a hive, technician David Dodge (left)
and entomologist Jeffery Harris look for mite damage to the bees. (K11142-1)

We all wish for good genes, especially those that guard us against serious illness and health problems. Having the right genes makes a difference—even in the world of honey bees.

Two entomologists with the Agricultural Research Service would agree. They've recently unleashed a trait in honey bees that offers defense against the parasitic Varroa mite. Known as SMR, for suppressed mite reproduction, the trait protects the important pollinators by stopping the mites from reproducing.

Honey bees—key deliverers of pollen grains—are needed in the production of $15 billion worth of U.S. crops. This includes a staggering list of fruits, vegetables, and other valuable crops. 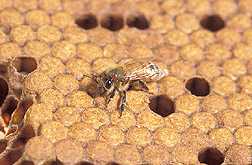 "Finding natural resistance has been our goal ever since the mite moved into the global population of honey bees," says Harbo. 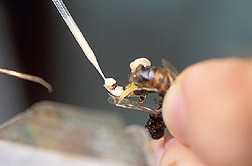 Collecting semen from a drone honey bee that will be used
to artificially inseminate a queen bee. (K11143-1)

And for good reason. Varroa destructor is the number-one threat to honey bees worldwide. The mites attach themselves to adult bees, often causing blood loss and spreading viral infections. Perhaps most apparent is the mites' impact on immature bees. Varroa invade brood cells where the soft larvae and pupae develop, leading to undersized adults and malformations like misshapen wings.

"If left untreated, mites will cause a beekeeper to lose a beehive and honey crop in 2 years or less," says Harbo.

The standard treatments for Varroa mites are chemical-based miticides, such as fluvalinate and coumaphos. But miticides are not long-term solutions, and mite populations are becoming resistant to them.

Of Mites and Men
"It seemed like a pretty hopeless situation," says Harbo of their initial thoughts on finding mite resistance in bees. "In nature you usually find a few individuals that pop up with resistance. We weren't finding any." 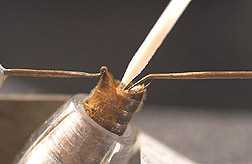 Artificial insemination of a queen. Semen is about to be injected into the oviducts of
a queen bee.Thereafter the sperm cells migrate to the sperm storage pouch of the queen.
A queen gradually releases sperm from this pouch to fertilize the eggs she lays during her lifetime. (K11141-1)

Despite the bleak scenario, the two researchers started chiseling away at the 20-year-old Varroa problem. Their first move? To try to isolate a factor responsible for controlling mite populations in bee colonies. Honey bees sometimes engage in activities that fend off mites, including hygienic behavior, where bees uncap and purge the contents of diseased brood cells. Some exhibit grooming behaviors, such as adult bees biting mites from their bodies or from the bodies of other bees.

But by the end of the studies, another characteristic appeared even more salient—the condition of nonreproducing mites. These are mites that enter brood cells to reproduce—but don't, for one reason or another. Most notable of these are female mites that don't lay any eggs. Harbo and Harris believed a trait of the honey bee was causing this to happen. 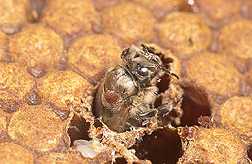 By measuring mite reproduction in a group of genetically related bee colonies, they determined that the trait did have a genetic component in the honey bee. But because environmental factors, especially heat, can also affect mite reproduction, the researchers wanted to find out how much of the affected mite reproduction should be attributed to the environment and how much to genetics. When their research uncovered an encouraging heritability level of 44 percent, Harbo and Harris began selectively breeding for the SMR trait.

Beekeepers Benefit
Under a cooperative research and development agreement that ended last year, ARS provided the SMR trait to Glenn Apiaries, a commercial queen honey bee producer in Fallbrook, California. Under the agreement, Glenn Apiaries propagated and sold pure SMR breeder queens to other U.S. breeders and to beekeepers who wish to insert mite resistance into their bee populations.

"The goal is to provide beekeepers with some immediate relief in their battle with mites," says Harbo. 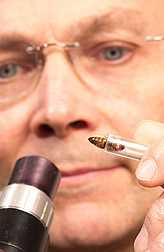 Selective breeding can bring mite reproduction to zero in worker brood. And because the trait is additive, less-selective breeding still produces results. For instance, if an SMR queen is mated to a male bee, or drone, without the SMR trait, the colony will still benefit from an intermediate level of around 50 percent resistance to Varroa.

The trait, which may be controlled by only two genes, can be bred into any population of bees. So, beekeepers can add desired mite resistance while maintaining genetic diversity and other good qualities in their colonies.

And what are beekeepers saying about SMR? "Beekeepers are happy that we're finding genetic resistance to Varroa, but most are cautious—and they need to be when it comes to controlling Varroa. Some are unsure whether they can completely eliminate dependence on chemical mite treatments. But those who monitor their mite populations will be able to determine the effectiveness of their SMR bees," says Harbo.

Another Pair of Genes Coming Soon
Harbo and Harris are studying a second trait in bees that offers mite resistance. They've been measuring the potential trait—dubbed "percentage of mites in brood" or P-MIB—for as long as they've been working on SMR, but they've just begun evaluating it in breeding studies. Mites reproduce only in brood cells, so selecting for low P-MIB would diminish the rate of mite reproduction.

"It would complement SMR well because it affects mites while they are outside, rather than inside, a brood cell where SMR has an effect," says Harbo. The two traits together may enhance resistance to Varroa mites.

The scientists have set their sights on creating absolute resistance to mites. Their objective: to assemble a hybrid bee that is completely resistant to mites, including tracheal mites, and has desirable commercial qualities, like good honey production. Given what is known about the SMR trait and the heritability of other traits, Harbo believes that producing such queens is feasible.
Erin K. Peabody
Agricultural Research Service Information Staff.

This research is part of Plant, Microbial, and Insect Genetic Resources, Genomics, and Genetic Improvement (#301) and Crop Production (#305), two ARS National Programs described on the World Wide Web at http://www.nps.ars.usda.gov/.

A Queen Gets Her Mate
In nature, a queen bee will mate with as many as 20 drones. As a result, the progeny of a single queen (a normal bee colony) make up a genetically diverse population. Because a honey bee is a social animal, the traits of special interest, like honey production and mite resistance, are often group effects measured at the colony level. These measurements reflect the interactions of a diverse group.

While colony diversity probably serves a role in adaptation, it poses a challenge to breeders hunting for rare inherited traits. To find these traits, Harbo and other bee breeders use a technique known as single-drone insemination. Using a special instrument, the scientists inseminate a queen with the genetically identical sperm of one drone. Her progeny are then very closely related and are more likely to express genetic uniformity at the colony level.

Harbo says the technique was a critical part of their SMR work. "With single-drone insemination, 1 in 10 colonies had very low levels of mite reproduction. With natural mating, I estimate that this level of resistance would be seen in 1 of 1,000 colonies."
Erin Peabody,

SMR -This Honey of a Trait Protects Bees From Deadly Mites - was published in the May 2004 issue of Agricultural Research magazine.