Natural and chemical Control of Varroa Destructor in Iran (2007)

The Varroa destructor Anderson and Trueman mite is considered as the causal agent of the most severe parasitosis of the honeybee. During its expansion throughout the whole world, it appeared in Iran in the 80s. It is known that this mite is characterized by its special reproductive cycle, linked to the different evolutionary phases of the bee colony.

The parasitic mite Varroa destructor is well known to beekeepers because in many countries it is the most common cause of death of Apis mellifera colonies. Methods of controlling the mite have been investigated and several products are now approved for use. A recent difficulty in Iran as well as in other countries has been the development of resistance in varroa to tau-fluvalinate (Apistan) and flumethrine (Bayvarol). This has led to a high mortality of colonies worldwide, and we have therefore investigated various new control products on sale.

The Ministry of Jahad-e-Agriculture of Iran has engaged important expenses for controlling varroa. In particular, they purchased many anti - varroa products from different companies (Ciba Geigy, Bayer, Sandoz, Farma-kachim, Alvetra, Vita Europe, Elanco, Biove' Chemcales LAIF), in order to test their action on the parasites and the effectiveness of different types of treatment: by inhalation (fumigation), absorption (systemic action) and contact (slow release methods). Varroa infestation in Iran is serious, and Table 1 lists the results of the treatments. Beekeepers must learn to live with it: they should maintain only strong colonies, requeen them every two years, and rear queens selected for their resistance to diseases. If these rules are followed, the colonies will not be endangered by the varroa mite.

Although we are in the 21century, varroa destructor will undoubtedly remain for several years one of the principal agents of the weakening of apiarian livestock. 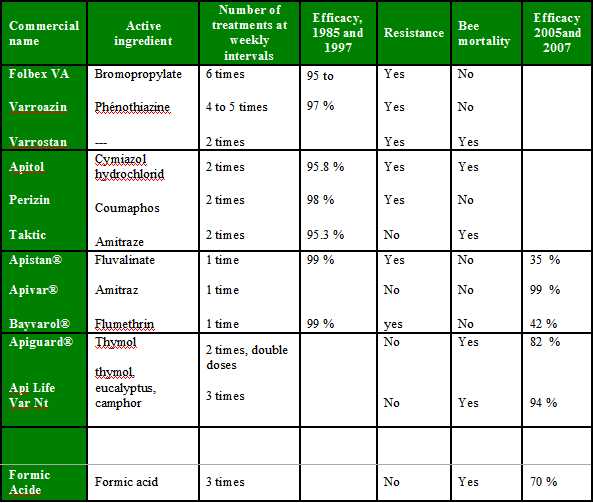 Since 1996 it has become apparent that varroa is resistant to Apistan probably for the following reasons:

Since 2005 it has become apparent that varroa is resistant to Bayvarol probably for the following reasons:

Recently use has been made of thymol, which is the active component of Api LifeVar and Apiguard . In 2000 and 2007, I tested Apiguard and ApiLifeVar, and also studied many publications from around the world. Thymol has the advantage of being a natural substance and one with a low toxicity to humans. Also, Varroa destructor has not been reported as resistant to it.

However, the use of Apiguard has the following disadvantages: