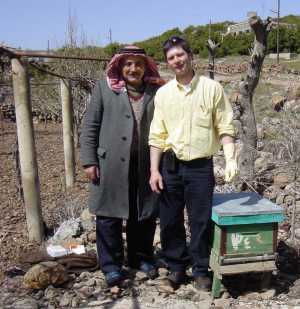 Syria
The birthplace of farming - is a dream place for those interesting in beekeeping. There you can find a specific race of honey bees, large melliferous areas and traditions that have remained unchanged from long ago; all these contribute to make this desert land buzz with life.

Geographic situation Syria is situated in the heart of the Middle East; it is a mountainous country crossed by the Euphrates River that comes down from the Turkish mountains in the North. The particularly fertile Euphrates River Valley produces cotton and sunflower seeds. The coastline stretches on 180 km along the Mediterranean Sea giving the country an important commercial opening . This Mediterranean coastline crossed by the Oronte River is the country's most important producing area of citrus fruit, grapes, olives and many other different varieties of fruit. The very well developed irrigation system of the valley is admired by agronomists from all over the world. The desert covers 60% of the country's surface area.

Syria is a dream land for history lovers and this is due to the richness of its archaeological vestiges. Its best-known features are Palmyra, the Crak des Chevaliers (crusader castles) and of course the ancient town of Ugarit where the first alphabet was discovered.

The Euphrates River Valley is the birthplace of farming; indeed 12,000 years ago Man settled in the Fertile Crescent and developed the first sowing and harvesting gestures. Just like farming, the technique for breeding honey bees in terracotta beehives was first developed in this part of the world. Some traditional apiaries made of horizontal beehives can still be found nowadays. In the desert areas of the Eastern part of the country, hives are made of interlaced plant material covered with mud. However, more and more often the trunks of cork trees and the terracotta hives are replaced by simple wooden boxes of 1 metre long and 15 cm large (photo 1) which are always placed horizontally and often piled up and kept together to constitute apiaries of over fifty colonies. In these hives, the honey bees make small honeycombs better able to resist strong heat. In the region of Maaloula - near the Lebanese border - the colonies are placed in niches inside house walls and there are sometimes up to a hundred hives per house which are protected this way from high temperatures. The Native Honey Bees Syria belongs to one of those countries lucky enough to have a native species of honey bees. Apis mellifera syriaca are found everywhere in the country as well as in Jordan, Lebanon and the northern part of Iraq. These yellow-coloured bees look like the Italian honey bees (ligustica) being only slightly smaller with the last two tergites grey (photo 2). These bees are very gentle in the eastern and southern parts of the country where the race has remained genetically pure. In addition, they are very well adapted to their habitat and are very resistant to droughts unlike the foreign bees which never survive more that one season. It is only on the Mediterranean coastline that the bees are highly crossed-bred with Italian and Carniolan (carnica) bees illegally imported by beekeepers in order to produce more. This, unfortunately, produces an aggressive breed which needs to be fed with sugary syrup during the winter season. This is the reason why most Syrian beekeepers wish to go back to the original native bees and would like to start a selected breed which would be as productive as the foreign bees. 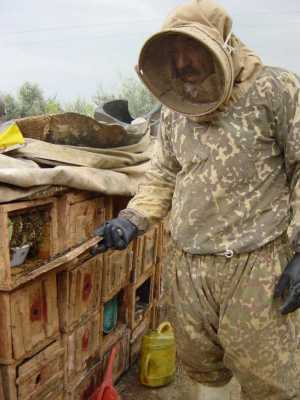 The local beekeepers have observed three kinds of ecotypes and these observations were confirmed by Dr Hicham Al Rouz's studies on the subject. The first one Sayafi (sabre) builds honeycombs that run parallel to the walls of traditional hives; the second one Ghanami (sheep) builds perpendicular ones to the walls and the third one Kamari (moon) builds in an arc. Saïd al Attar has observed that when a colony of native bees was transferred from a Sayafi type of hive to a Ghanami type of hive, the normally peaceful honey bees would then become very aggressive.

The Flora
The main honey flows:

Syrian Beekeeping
There are 365,000 hives and the official production is 1,750 tonnes a year. Eighty per cent of the hives belong to the divisible Langstroth-type; the rest being the traditional types. The beekeeper can live off his production when he owns at least 100 hives. Transhumant hives produce an average of 20 to 25 kg of honey. Compared to the international market prices, the local honey selling price is very high - from 7 €uros/kg for cotton or sunflower honey to 24 €uros/kg for thyme honey. This honey is sold in specialized shops and in the numerous souks of big cities. Some important quantities are used to make glacés fruits but contrary to the Maghreb countries, honey is hardly used to make pastries. According to the first writings of Abu Hamid al Ghazzali and Abu Kaim al Jausieh honey has always been regarded as a supreme medicine in Syria. Some fine honeys such as thyme honey are exported to the Gulf countries but this only represents 30 tonnes a year.

No treatments As regard to beekeeping, the particularity and the advantage of Syria is the low use of pesticides by farmers who cannot afford the high costs of treatments. The large fields of cotton that are grown on the banks of the Euphrates River allow a safe transhumance for the beekeepers and this is quite an amazing fact as cotton is one of the most treated plants in the world.

The same thing applies to the hillsides of the volcanoes in the eastern region of Stuweida where the numerous orchards of apple trees produce thoroughly biological apples. In order to guarantee a better pollination of the crops, the government is helping and encouraging beekeeping projects and for the past 10 years it has been giving 5-year loans for the purchase of hives. Five workshops have been set up across the country to make hives and they have production capacity of 10,000 hives a year. The cost of buying a hive is the same as selling 3 kg of honey. About a hundred experts in beekeeping teach the new apiculture methods in 20 specialized centres. They breed and sell swarms for 30 €uros and stocked hives for 50 €uros. These 20 centres can have up to 300 trainees a year. The aim of the government is to eventually have 500,000 hives spread out on the crops in order to guarantee a good pollination and also to help 15,000 young beekeepers to start in apiculture in a country where the unemployment rate reaches over 30%. The government has the ambitious project of afforesting the mountain areas with eucalyptus and acacia trees and these new areas of melliferous plants would increase the transhumant beekeepers' season.

The Syrian beekeepers and the beekeepers from around the Mediterranean Basin meet the same kind of problems. Varroa is fought with either acetic acid or Bayvarol and the presence of bee-eaters (merops apiaster and merops superciliosus) in most areas is a real problem. In some cases and because of the increasing frequency of these attacks, the beekeepers are sometimes left with no other alternative but to move away some apiaries. In the southern region of Suweida and in the border region with Iraq, jackal attacks on hives can cause damages comparable to those made by badgers in western Europe and in Africa. With regard to the high number of wasps, problems only occur with the imported bees and their hybrids but they do not affect the native Syrian honey bees which are perfectly adapted to their environment and can get rid of them by themselves.

RQueen Honey Bees and Royal Jelly Some beekeepers are specialized in the breeding of queen honey bees as well as in the production of royal jelly. The technical level of these new kinds of exploitations is remarkable. These days about 300 kg of royal jelly are produced with a retail price of 2 €uros/gram in the local market. Syriaca honey bees are particularly well adapted to this production and willingly fill important quantities of cupules.

Apiculture without Borders (Apiculteurs sans Frontières) People involved in Apiculture without Borders have been present in that part of the world for the past 5 years. These volunteers have given their time and shared their knowledge in apiculture in Lebanon, Syria, Jordan and Morocco. As regard to Syria, this constructive exchange is the fruit of the work of both Mr Saïd al Attar from Syria and Mr Robert Yvrard the French Chairman of Apiculteurs sans Frontières. 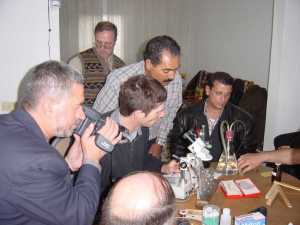 Their mission ranges from the popularisation of basic beekeeping techniques - such as the production of honey in traditional hives - to the breeding of queen honey bees and the teaching of instrumental insemination (photo 4). The main idea of this organization is to develop and to make the most of the region's beekeeping resources while at the same time respecting the local customs. It also aims at helping with the selection of the native honey bees to avoid any dependence on importations.

And your Lord revealed to the bee saying
'Make hives in the mountains and in the trees and in what they build:Then eat of all the fruits and walk in the ways of your Lord submissively. There comes forth from within it a beverage of many colours, in which there is healing for men; most surely there is a sign in this for a people who reflect'.
The Koran - Chapters 16.68/69 taken from The Bee

Itinerary of the transhumant beekeeper