Radar records flight of the honeybee (2000)

Friday, February 4, 2000
Tiny radar transponders attached to the backs of honeybees are allowing scientists to track how the insects learn to forage, according to research published in Thursday's edition of Nature.

"A bee is two and half centimeters long with a brain the size of a large peppercorn," said Elizabeth Capaldi, a researcher at the University of Illinois. "Yet they can fly 10 kilometers (6.2 miles) away from the hive to forage and then make a straight line home. How do they do that?"

The question has been buzzing in entomologists' brains for years.

Visual observations indicate a honeybee takes several test flights before it becomes a true forager, like a commercial airline pilot before he is charged with a plane full of passengers.

A recently developed harmonic radar system, which uses a lightweight transponder to shift a fundamental radio wave through a "harmonic" and re-emit the signal without the aid of a power supply such as a heavy battery, allowed the researchers to track the bees on their orientation flights.

The data shows that each orientation flight is within a narrow sector straight from the hive, Capaldi and colleagues Susan Fahrbach and Gene Robinson report.

Bee in their bonnet:
Researchers placed a transponder on the back of a bee (Apis mellifera) to track its flight patterns.

"It seems as if they are exploring different sections of the landscape," said Capaldi, "which suggests they need to learn about the landscape progressively."

In that way, honeybees are like travelers visiting a city for the first time. "You might walk around and find a nice restaurant. Then you return to the hotel. Then you go to a monument. Then you find that at the monument that you can point to where the restaurant is," Capaldi said.

As the bees gain experience, they fly farther and farther away from the hive, but the duration of each flight remains about the same. They accomplish this feat by flying faster and faster, the scientists report.

"This correlation between distance and speed suggests that bees fly higher on longer orientation flights," writes Thomas Collett, a biologist at the University of Sussex in England, in an accompanying Nature article. 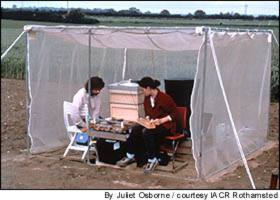 The bee's knees: Andrew Martin, left, a research associate with IACR Rothamsted,
and Elizabeth Capaldi, right, a research fellow at the University of Illinois, are in their
element observing buzzing bees - without getting stung - in Harpenben, England.

This interpretation of the data means that bees "learn small features of the landscape close to the ground when they are near the hive and larger features when they are farther away," Collett concludes.

Capaldi cautions that the radar tracking system measures position and range, not height.

The entomologists hope their research will answer basic questions about how animals interact with the sensory world. A bee can learn to forage 10 kilometers (6.2 miles) from its hive in a four- to five-week life span.

"We have huge brains and we can't do these things," said Capaldi.