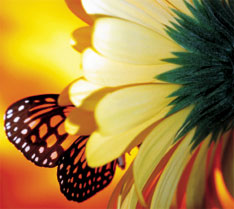 In biodiversity hot spots like tropical rainforests, a dearth of pollinators could be putting many species at risk of extinction, according to a new study that includes three Pitt researchers. The finding is raising concerns that more may need to be done to protect the Earth’s most biologically rich areas.

The study, titled “Pollination Decays in Biodiversity Hotspots,” appeared in the Jan. 16 issue of the journal Proceedings of the National Academy of Sciences.

As the number of birds, bees, and other pollen transporters declines around the world, competition for their attention is becoming increasingly fierce for plants that need their services for reproduction - to the point where species in the most fertile areas of the world are struggling for survival.

“Pollinators are on the decline globally because of habitat loss and destruction, pesticide use, invasive species, and extinction of vertebrates,” said Tia-Lynn Ashman, associate professor of biological sciences at Pitt, who was involved in the study along with former Pitt biology graduate students Janette A. Steets, now of the University of Alaska Fairbanks, and Tiffany Knight, now of Washington University in St. Louis, and colleagues at other institutions. University of Calgary biologist Jana Vamosi led the study.

Ashman, Vamosi, and their colleagues reviewed more than 1,000 pollen limitation studies from around the world and found that, in areas where there is a great deal of plant diversity, including South American and Southeast Asian jungles and the rich shrubland of South Africa, plants suffer lower pollination and reproductive success. For some plant species, this reduction in fruit and seed production could push them towards extinction.

“Wild plant species in biodiversity hotspots are an important world resource for the ecosystem services they provide, including medicine, food, nutrient cycling, and alternative resources for pollinators of domesticated crops,” Ashman said.

Further research will be done to determine what causes pollen limitation worldwide. The authors speculate that when many species exist in the same place, plants become more separated from other individuals of the same species, causing pollinators to fly long distances to deliver pollen. When pollinators do arrive, they may deliver unusable pollen from other plant species.

Other authors of the study were Susan J. Mazer of the University of California, Santa Barbara, and Martin Burd of Monash University in Melbourne, Australia.

The research was supported by the National Science Foundation’s National Center for Ecological Analysis and Synthesis.
Karen Hoffmann