Beekeepingand Honey are a Part of Tradition in Madagascar (1985) 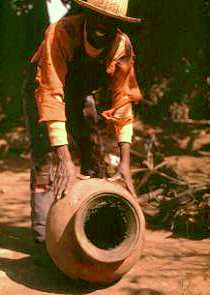 When a baby is first taken out to the market, tradition demands that he have a little taste of honey. With the assistance of the "Guilde Europeenne du Raid" a young team investigates customs and tradition relating to bees and honey. Madagascar is one of the few countries in the world where man lives in day to day contact with bees.

Madagascar is situated in the Indian Ocean off the eastern coast of Africa and is a small "continent" about the size of France and the Benelux countries put together. This "Red Island" is a real problem for anthropologists

because of its 19 tribes with differing traditions coming from different continents.

Early in the morning, in the middle of the tropical forest, following a "honey hunter" we are off on our first "bee hunt". It is tradition handed down from an extraordinarily rich and wonderful past.

The catching of wild swarms is today a practice in the forested parts of the east coast of the country. Nirina stops regularly, and, facing the sun, he watches the coming and going of the bees to locate the place where a swarm may have settled. To help guide our young "Mpantanely" there are also the bee droppings on the leaves.

The knowledge and the precise movements acquired from his father he will pass on to his own son who will thus be able to live a better life than his wood-coal producing cousins. At the end of the year he will be able to buy "extras" like a pair of shoes or even a radio thanks to the bees! 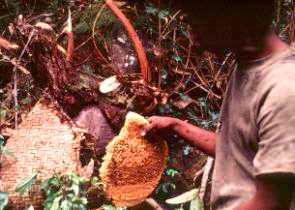 Using only a "sobika" sewn nearly shut, a small queen cage made of bamboo and a bowl we walk along in the forest of Brazilian rosewood. When he's found the swarm Nirina lights up a piece of dry sisal which makes the smoke necessary to get the bees to come out of the hole in the tree or rock where they have begun to build their honey combs. Carefully he puts his hand into the cavity and when he takes it out, it is covered with bees.

When he has carefully looked among them for the queen bee he shakes them away in the "sobika."1 He goes on like this until he's found the queen and put her in the small bamboo cage which is fastened in the "sobika." 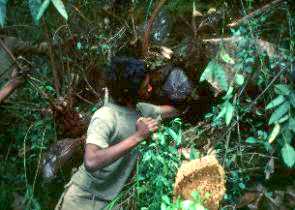 When the hollow is empty Nirina can collect the honey and brood combs and put them in the bowl. Nirina's family is very fond of the brood comb; it will be eaten just as is. The swarm, along with approximately 400 others, will be sold at the near-by market. The honey will be sold to mead specialists coming from the main town to prepare the local alcohol, "toaka." When he is lucky, Nirina may return home with more than 50 kg of honey comb in a single day. 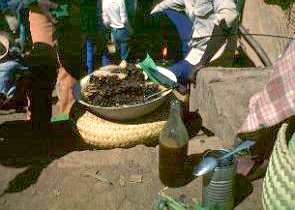 Honey from coffinsNirina is unaware that a few kilometers from him other tribes produce honey in a totally different way. In the "high plateaus" we noticed that consumers refused to buy a dark honey coming from the forest because they thought that it has been touched by death. All this intrigued us and so we decided to go into the deep forest. Long hours of walking brought us our reward. In this part of the country people put their coffins in trees.

A few years later bees will use this shelter as a hive. Then it is possible to collect plenty of honey, but people refuse to eat it because it is "fady" (taboo, forbidden) so they will trade it to other tribes in exchange for salt, matches or tools. Of course, these unique beekeepers don't say where their honey comes from because it has come in contact with the sacred world of their ancestors who are worshipped and who are always in the minds of the livings.

Honey in some form is always used in their ceremonies. So it is that honey is instrumental in handing down the philosophy of their ancestors. It is used in other rites as well, such as the brotherhood rite in the land of the Zafimaniry. During this ceremony, which is a pledge of friendship, the two people concerned cut themselves on the chest, near the heart; they make a vow before a winnowing basket filled with a paste made of honey and ginger in which an "assagi" has been placed. They exchange blood by sucking each other's and then they eat the paste. These rites differ markedly from one tribe to another which is what makes their heritage so rich. 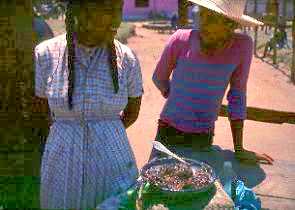 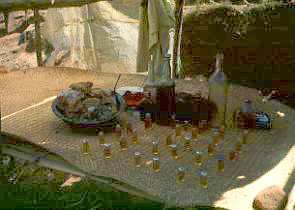 Honey, a Name
During our investigations and in our discussions with the Malagasy farmers we were able to judge the importance of bees and honey in their everyday life. For example, the name Tantely (honey), denoting sweetness, is a name often given to a boy as well as to a girl. When you go to a country market you usually find three or four honey sellers.

They sell small chunks of honey comb wrapped in banana leaves. It is not very expensive and this sweet is sought after by lots of greedy children and adults. In Tananarive's famous market, Zoma, we counted more than 15 honey sellers. The traditional importance of the bee is shown in some place names, such as Ambohitantely (mountain of honey) or Lokobé (place full of beeswax).

When a baby is first taken out to the market, tradition demands that he have a little taste of honey. There are many Malagasy proverbs relating to honey, its sweetness and to the wisdom of bees. We can find 20 of them in J.A. Boulder's collection of proverbs :

4 Kg of Honey Per Inhabitant
The island has a great beekeeping potential; a traditional hive may produce more than 50 kg of honey per year and the native bee (Apis unicolor) is well adapted to the country and free of disease. If, today, Madagascar is self-sufficient in honey, supplying 4 kg of honey per inhabitant, according to the works of Douhet (1965) and Chandler (1975); in the future the island will probably take an important place on the international honey market. 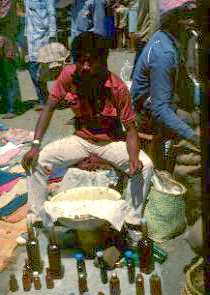 50 Kg Equals an Ox
We can suppose that a ready market will be found in the future for Madagascar's different kinds of honey (Robusta and Citriodora) produced in the high plateaus to the litchi flavored honey (Néphélium litchi) produced on the coast. At the present time clear honey, produced on frames in modern hives, must be considered a luxury item because the price of 50 kg of this type of multiflora honey would buy an ox and the price of 5 kg equals an average worker's monthly income.

Thus, it is easy to understand why 80 % of Madagascar's honey consumption comes from honey hunting. Unfortunately, most of the time this honey is full of pieces of brood and pollen; sometimes water is added, and often it is boiled to prevent crystallization. So, a gift of nature is ruined.

On the island agricultural development is often hindered by deeply rooted customs. In some areas seeing a swarm leaving a hive is a sign of bad luck and such fear is enough to discourage farmers from keeping hives. With little regard for preserving the environment some tribes cut the "honeytrees" for their wax and honey.

The increase of bush fires on the "high plateaus" is not only a danger of beekeeping, but also accelerates the movement of the best arable land toward the sea. In some remote areas the economic and political situation leads to vandalism and so some beekeepers put traps or guns around their beeyards, sometimes killing thieves.