Albuquerque, New Mexico (CNN)
If researchers working with the Defense Department have their way, land mine detectors buzz like a smoke or metal detector -- only literally. Chemists at Sandia National Laboratory in New Mexico are trying to find out whether honeybees can be used to detect buried land mines. 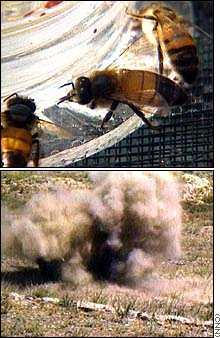 These bees are being trained to sniff out explosives

University of Montana scientists have discovered that bees foraging for pollen and nectar pick up dust, soil and other particles on their bodies and bring them back to the hive. Those particles can include explosives such as TNT, a primary ingredient in many land mines.

"All land mines leak explosives into the environment," said Phil Rodacy, a land mine specialist at Sandia.

"If you can get bees to go into that area they'll then collect the explosive signatures that are coming off the mines, they'll bring it back to the hive and we can detect it using various chemical sensors."

Bees bring pollen back to the hive on their back legs after a morning of foraging.

"And if everything works out with this project, it will be easy to deploy a box wherever you think land mines are, and then you just look at the bees."

The researchers have set up a greenhouse experiment to study how plants incorporate explosive residue into their systems. Inside the greenhouse, they also are looking at how bumblebees deal with TNT-tainted plants.

And Sandia has set up a field of land mines, minus the fuses.

"It allows us to observe the bees to see whether or not they're in the area," Rodacy said. "We can also take samples of the plants to see how much explosive is actually coming out of the mine and getting into the environment." 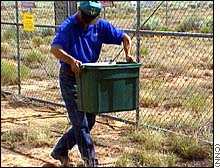 A researcher moves the feeder further away from the hive

Ultimately, researchers hope to train the bees to actually go and find buried mines, sort of a game of "hive and go seek."

So how do you train a bee?

"We take a small feeder, place it near the bee hive and then get the bees used to going back and forth to that feeder," Rodacy said.

"Then we move that feeder farther and farther away from the hive, then cover it and the bees tend to follow that feeder. Since there's explosive crystals near the feeder, they associate that smell of the explosives with their food source."

"The project is at a stage where you could deploy bees in an area that you thought had explosives," Rodacy said. "If there were a high enough concentration of explosives in a field, you would be able to detect it in the hive."

The scientists plan at least two more years of testing, including a live land mine experiment next year. If all goes well, they hope to use bees for real land mine detection within five years.
CNN Correspondent Allard Beutel contributed to this report.