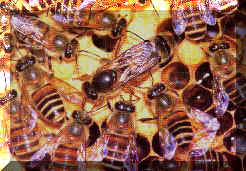 Introduction
Hygienic behavior of honey bees is the primary natural defense against American foulbrood (Park et al., 1937; Woodrow and Holst, 1942; Rothenbuhler, 1964) and chalkbrood (Gilliam et al., 1983). Hygienic bees detect, uncap, and remove diseased brood from the combs before the disease becomes infectious. Hygienic behavior also is one defense against Varroa mites (Peng et al., 1987), and although it is not the main mechanism of resistance to the mites (Harbo and Hoopingarner, 1997), it appears to limit their reproduction and population growth to some degree. Our studies have shown that it is possible to select for hygienic behavior without compromising honey production or gentleness (Spivak, 1996; Spivak and Reuter, in press). The trait can be found in approximately 10 percent of the managed colonies found in the United States, in any race or stock of bees. We feel it would benefit the beekeeping industry to have hygienic lines of bees commercially available.

In this article, we present a simple way of screening colonies for hygienic behavior. We also discuss some frequently asked questions about the behavior, and how to breed hygienic colonies.

Using Liquid Nitrogen
For years, we screened colonies for hygienic behavior by cutting out a section of comb (2 x 2.5 inches) containing sealed brood, freezing it for 24 hours, then placing the frozen comb section in the colony to be tested. If the test colony was hygienic, the bees would uncap and remove the freeze-killed brood within 48 hours when tested repeatedly (Taber, 1982; Spivak and Downey, 1998). Cutting comb sections out of frames is relatively messy and damages the combs, so we sought a better way of killing brood without having to handle the combs.

Dr. Jerry Bromenshank at the University of Montana was the first to suggest using liquid nitrogen (N2) to freeze a section of sealed brood within the frame. He found that freezing the brood this way was more efficient than cutting, freezing, and replacing comb inserts. Based on his suggestions, we conducted several tests to determine how much liquid N2 was necessary to completely kill the brood, and whether the test yielded the same results as cutting and freezing comb sections. We are now convinced that freezing brood with liquid N2 is the best screening procedure found to date for assaying hygienic behavior.

Liquid N2 is relatively inexpensive and easy to obtain; check with your local veterinarian or livestock artificial inseminator. It must be kept in an appropriate tank and securely fastened to the truck during travel to avoid spillage.

Common sense and several precautions must be used when handling liquid nitrogen. It has a boiling temperature of -320&#61616;F (-195.8&#61616;C) which means that it is extremely cold and will kill skin (causing severe frostbite) on contact. Protective clothing including heavy gloves, boots, a face shield and safety glasses should be worn. The boots should be sufficiently secure so that the liquid N2 can not be spilled into them.

You will need to construct (or find) a hollow cylinder into which you will pour the liquid N2 to freeze a circular section of sealed brood. We have been using a 3-inch diameter cylinder, cut from galvanized clothes-dryer vent. The cylinder must be at least 4 inches long because the nitrogen will boil on contact with the brood. The thinner the walls of the cylinder, the easier it is to press into the comb assuring a good seal.

Nine to 10 ounces (250-300 ml) of liquid N2 is needed to freeze-kill all the brood (approximately 160 cells) within a 3-inch diameter cylinder. A smaller amount will not kill all of the brood, leading to erroneous results. Use a 10-ounce or larger Styrofoam coffee cup for measuring and pouring. Other materials will shatter on contact with the liquid N2.

Select a frame with at least a 3-inch diameter circle of sealed brood containing fewer than 30 unsealed cells within the circle. Lay the frame horizontally across a support (i.e. an empty super). Twist the metal cylinder into the sealed brood until it reaches the midrib. Record the number of unsealed cells inside the cylinder. Pour a couple ounces of the liquid N2 into the cylinder and wait for it to freeze the edges or evaporate. Then pour the remainder of the liquid N2 into the cylinder. Wait to remove the cylinder until it thaws, which may take three to five minutes. If you have additional cylinders, you can start the next test while you are waiting for previous ones to thaw. We put a thumbtack in the top of the frame to mark the frame and the location of the test on the frame. Some hygienic colonies clean and repair the comb so quickly that it is hard to locate the test when you return. Place the frame in the center of the brood nest.

Remove the frame containing the frozen brood 48 hours later, and record the number of sealed cells remaining within the circle. When testing a colony that has been requeened, six to eight weeks must elapse after requeening for the bees in the colony to be daughters of the new queen.

Frequently Asked Questions
Often we are asked if hygienic colonies tend to have clean bottomboards, or if they tend to remove debris (such as wax paper, newspaper or cardboard) from the colony more quickly than other colonies. Mayer (1996) suggested that if colonies eat grease patties quickly, they might be hygienic. Removing debris from the hive is a form of cleanliness, but it is not necessarily a sign that the bees carry the hygienic trait.

Although the common usage of the word hygienic denotes cleanliness, hygienic behavior is a specific response by the bees to diseased and parasitized brood. A colony that keeps its hive clean does not imply that it will be resistant to diseases. Colonies must be screened for hygienic behavior using an assay such as the one described above. If a colony removes all of the freeze-killed brood within 48 hours, the colony will probably be resistant to diseases and will tend to remove mite-infested pupae. To determine whether they can actually resist the diseases or mites, the colony would have to be challenged with American foulbrood, chalkbrood or mites.

Another question we encounter concerns the difference between hygienic and grooming behaviors. Grooming behavior involves an interaction between adult bees; one bee removes mites or debris from the body of another bee. Alternatively, a bee may groom herself. Grooming and hygienic behaviors are different traits, and selecting for one does not imply selection for the other.

Propagating Hygienic Colonies
Any race or line of bees can be bred for hygienic behavior. We recommend that bee breeders select for hygienic behavior from among their best breeder colonies; i.e., from those that have proven to be productive, gentle, and that display all the characteristics desired by the breeder. A breeder can get a head start on selecting for hygienic behavior simply by rearing queens from colonies that do not have chalkbrood.

When colonies are first screened for hygienic behavior using liquid N2, they may not remove all of the frozen brood within 48 hours. The colonies that remove the most freeze-killed brood within 48 hours should be propagated by rearing queens from them. Subsequent generations will remove the brood more quickly, because hygienic queens from the first generation will produce drones for the second generation. If the hygienic queens are instrumentally inseminated with semen collected from drones from hygienic colonies, or are mated naturally in an isolated area, where all the surrounding drones are from hygienic colonies, it will be easier to fix the trait in your line of bees.

Beekeepers should rear queens from unrelated hygienic colonies each year to avoid the negative effects of inbreeding. In time, if many bee breeders select for hygienic behavior, the frequency of the trait should increase in the general population of bees, which will increase the chances that any queen will encounter drones that carry the trait.

The effects of American foulbrood, chalkbrood and Varroa mites can be alleviated if queen producers select for hygienic behavior from their own lines of bees. Because a small percentage of the managed colonies today express hygienic behavior, it is important for many bee breeders to select for the behavior to maintain genetic variability within and among bee lines.

Our experience has shown there are no apparent negative characteristics that accompany the trait. Years of research experience have shown it would greatly benefit the beekeeping industry if productive, hygienic lines were available commercially.