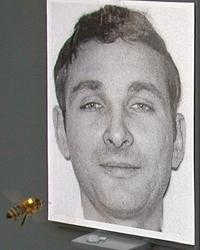 Honeybees may look pretty much all alike to us. But it seems we may not look all alike to them. A study has found that they can learn to recognize human faces in photos, and remember them for at least two days.

The findings toss new uncertainty into a long-studied question that some scientists considered largely settled, the researchers say: how humans themselves recognize faces.

The results also may help lead to better face-recognition software, developed through study of the insect brain, the scientists added.

Many researchers traditionally believed facial recognition required a large brain, and possibly a specialized area of that organ dedicated to processing face information. The bee finding casts doubt on that, said Adrian G. Dyer, the lead researcher in the study.

He recalls that when he made the discovery, it startled him so much that he called out to a colleague, telling her to come quickly because “no one’s going to believe it—and bring a camera!”

Dyer said that to his knowledge, the finding is the first time an invertebrate has shown ability to recognize faces of other species. But not all bees were up to the task: some flunked it, he said, although this seemed due more to a failure to grasp how the experiment worked than to poor facial recognition specifically.

In any case, some humans also can’t recognize faces, Dyer noted; the condition is called prosopagnosia.

In the bee study, reported in the Dec. 15 issue of the Journal of Experimental Biology, Dyer and two colleagues presented honeybees with photos of human faces taken from a standard human psychology test. The photos had similar lighting, background colors and sizes and included only the face and neck to avoid having the insects make judgments based on the clothing. In some cases, the people in the pictures themselves looked similar.

The researchers, with Johannes Gutenberg University in Mainz, Germany, tried to train the bees to realize that a photo of one man had a drop of a sugary liquid next to it. Different photos came with a drop of bitter liquid instead.

A few bees apparently failed to realize that they should pay attention to the photos at all. But five bees learned to fly toward the photo horizontally in such a way that they could get a good look at it, Dyer reported. In fact, these bees tended to hover a few centimeters in front of the image for a while before deciding where to land.

The bees learned to distinguish the correct face from the wrong one with better than 80 percent accuracy, even when the faces were similar, and regardless of where the photos were placed, the researchers found. Also, just like humans, the bees performed worse when the faces were flipped upside-down.

“This is evidence that face recognition requires neither a specialised neuronal [brain] circuitry nor a fundamentally advanced nervous system,” the researchers wrote, noting that the test they used was one for which even humans have some difficulty.

Moreover, “Two bees tested two days after the initial training retained the information in long-term memory,” they wrote. One scored about 94 percent on the first day and 79 percent two days later; the second bee’s score dropped from about 87 to 76 percent during the same time frame.

The researchers also checked whether bees performed better for faces that humans judged as being more different. This seemed to be the case, they found, but the result didn’t reach statistical significance.

The bees probably don’t understand what a human face is, Dyer said in an email. “To the bees the faces were spatial patterns (or strange looking flowers),” he added.

Bees are famous for their pattern-recognition abilities, which scientists believe evolved in order to discriminate among flowers. As social insects, they can also tell apart their hivemates. But the new study shows that they can recognize human faces better than some humans can—with one-ten thousandth of the brain cells.

This raises the question of how bees recognize faces, and if so, whether they do it differently from the way we do it, Dyer and colleagues wrote. Studies suggest small children recognize faces by picking out specific features that are easy to recognize, whereas adults see the interrelationships among facial features. Bees seem to show aspects of both strategies depending on the study, the researchers added.

The findings cast doubt on the belief among some researchers that the human brain has a specialized area for face recognition, Dyer and colleagues said.

Neuroscientists point to an area called the fusiform gyrus, which tends to show increased activity during face-viewing, as serving this purpose. But the bee finding suggests “the human brain may not need to have a visual area specific for the recognition of faces,” Dyer and colleagues wrote.

That may be helpful to researchers who develop face-recognition technologies to be used for security at airports and other locations, Dyer noted. The United States is investing heavily in such systems, but they still make many mistakes.

Already, the way that bees navigate is being used to design “autonomous aircraft that can fly in remote areas without the need for radio contact or satellite navigation,” Dyer wrote in the email. “We show that the miniature brain can definitely recognize faces, and if in the future we can work out the mechanisms by which this is achieved,” this might suggest ideas for improved face recognition technologies.

Dyer said that if bees can learn to recognize humans in photos, then they reasonably might also be able to recognize real-life faces. On the other hand, he remarked, this probably isn’t the explanation for an adage popular in some parts of the world—that you shouldn’t kill a bee because its nestmates will remember and come after you.