Take Action
As armor for battle, Danga Yermbany’s ill-fitting suit of straw may seem an odd, even ludicrous, choice. But the costume of the 80-some-year-old Gbaya elder, who will face his adversaries perched precariously above the jungle floor of West Africa on a rickety wooden scaffold, will prove quite effective. 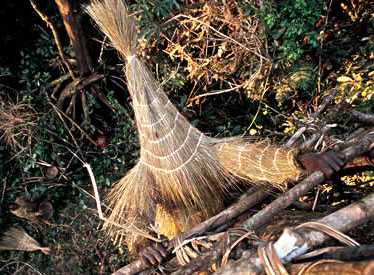 A Cameroonian honey hunter prepares to battle a hive of bees 45 feet above the forest floor protected only by a straw suit.

Yermbany and several of his friends practice a ritual known as éé bì ngour-ngour, or "going into battle," the traditional harvesting of wild honeycombs. Instead of using smoke to pacify the bees, these hunters rely on plant sedatives and straw armor bound with fiber from a raffia palm. The old tradition originates from a time when the Gbaya depended on nutrient-rich honey for their survival and could not light fires for fear that the smoke would reveal their whereabouts to their enemy. Although no longer at war, some members of the Gbaya continue this tradition, disappearing into the forest during the dry season for several weeks. These remarkable images represent the first time this secret practice has ever been photographed. 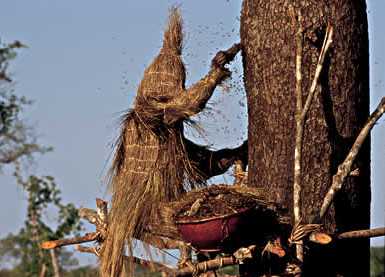 As Yermbany fills his last calabash full of honeycomb, the bees awaken from their drug-induced lethargy and begin to swarm. Before retreating, he will lower the heavily laden bowl down to his helpers with a vine,
moving slowly and methodically so as not to anger the bees even more.

The Gbaya locate the nests in the thick tangle of riverine forest of Cameroon’s Adamawa plateau with the help of the greater honeyguide, a diminutive bird species that has developed a unique symbiotic relationship with humans and a honey-eating badger. Unable to retrieve the honeycombs by itself, the honeyguide enlists the help of larger predators by leading them to honey-rich nests with its call. 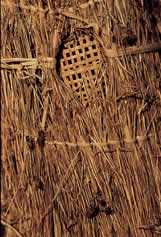 The Gbaya honey hunters weave special eyeholes into the helmets of their straw suits.

To subdue the bees, Yermbany will deposit a mash of verbena or euphorbia leaves into the nest, then seal the opening with mud. Yermbany mixes the batch of natural sedatives carefully: too much will kill the bees and destroy the colony, too little will endanger the honey hunter. The mixture will give him less than 20 minutes to extract the honeycomb. Even at its most effective, however, the sedative won’t knock out all of the bees. French photographer Gilles Nicolet reports that angry bees penetrated his protective, modern gear and stung him on the nose, lips and forehead, and left two stingers in the eye he was using to peer through the viewfinder of his camera. 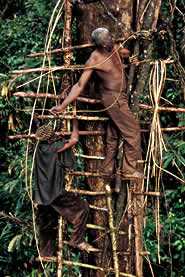 Hours earlier, the men built a scaffolding up to the
nest and a small balcony directly outside it,
working quietly so as not to disturb the bees.

Honey hunters must also beware of snakes, which are sometimes found inside bee nests; the deadly green mamba’s bite contains a venom so toxic that a bitten hunter can die in minutes. Although Yermbany must endure the pain of many dozen stings, the costs are worthwhile to him: each nest yields 50 pounds of golden honeycombs on average. He always leaves enough comb to ensure the survival of the colony. And Yermbany never forgets to reward the honeyguide with a sweet finder’s fee of comb dripping with honey and filled with bee larvae.
John F. Ross 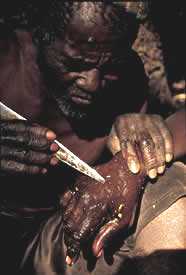 The hunter’s hands, un-protected so he can
retrieve the honey, bear the brunt of the hive’s
anger and a friend must remove dozens of stings. 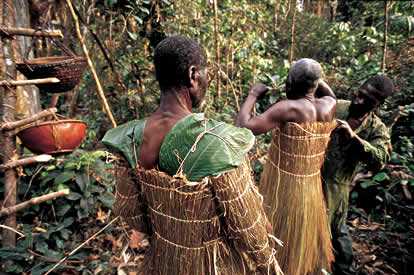 Like knights preparing for battle, Danga Yermbany and Iyawa Samuel don their
straw armor, protecting their shoulders from bruising with leaf shoulder pads. 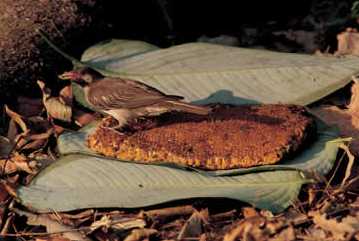 TIn exchange for a cut of the take, the greater honeyguide led the
hunters to the nest with its excited chattering. If the bird does
not appear on its own, the hunters summon it by whistling, singing
or rhythmically tapping on a tree trunk with their machetes.