Relationship between larvae age and characteristics of queens (2003)

Introduction
Productivity of a colony depends on some environmental factors like climate and type of plants, queen bee, colony performance, bee diseases, genotype and beekeeping techniques. Turkey is quite available as means environmental factors for beekeeping. Colony productivity mostly is related with the factors belong to colony. The most important of those factors is queen bee [1].

Queen bee is the mother of all other individuals in the colony. The queen is the breeding depository of all of the inherited characteristics of the colony acquired through her progenitors and through the acquisition of the sperms from males at the time of mating. Thus, the queen is responsible for the color of the bees, their industry, degree of gentleness, resistance to disease, swarming tendencies, longevity, comb building propensities, and for many other colony and individual attributes [2].*

Productivity of queen bee depends on her age, breed, breeding term, weight in emergency, age of larvae and grafting methods, number of ovariol, diameter of spermatheca, number of spermatozoa in spermaethaca, and if she has anatomical disorder or not. [3, 4].

Queen bee, average 4-5 years lifetime, maintain its productivity just only first 1-2 years. Secretion of pheromones, the effects of the pheromones on the colony individuals and efficiency of laying eggs is decrease in lately age of queen. Therefore, queen bee should be replaced in every year in stable bee breeding or once in two years in traveling bee breeding. [ 4].

Materials and MethodsTwo feeding colonies and 90 mating colonies were used at the Agricultural Research and Application Farm in Erzurum. Doolittle grafting method was used for queen bee rearing. Two queenless breeder colonies were used for each grafting group instead of using starter or starter-finisher colony. One grafting comb with three units queen cell cups was given to each breeder colony. Forty five larvaes in group one (A1) were single grafted, 45 larvae in group two (A2) were double grafted.1, 2 and 3 day old larvaes were grafted in both grafting groups (A1, A2). Wooden cell cups were used as queen cell cup. The queen cells cups kept in feeder colony until the cups be completely closed were placed in individual plastic vials and put in an incubator set at 33.0 ± 0.05 C and 60-65 % RH [5,6, 7]. The incubator was checked every 4-5 hours for newly emerged queens. Shortly after queens emerged from her cell were weight, marked and numbered and were placed in mating colonies (nuclei) in nursery cages. Virgin queens were permitted to mate after 24 hour placed in the nucleus.

Results
The results of queen weight at emergency, pre-oviposition period, diameter of sperm theca and the number of spermatozoa were given in Table 1, Table 2, Table 3, and Table 4. There were no differences pre-ovi-position periods in queens reared by single and double grafting methods [9]. 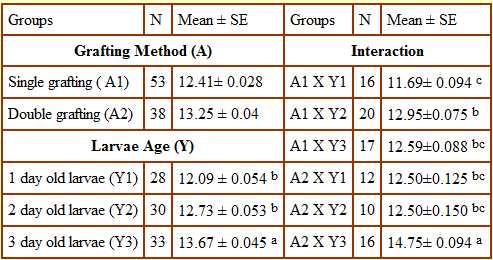 Table 1. The results of pre-oviposition period

Discussion In present study, results of max and min pre oviposition period, 16d and 9 d, respectively, similar to findings obtained by different researchers Gul and Kaftanoglu [10], Genc [7] and, Dodologlu and Genc [11]. In queen bee rearing, virgin queen is required to start laying egg as short as due to use season more effectively and extend period of using of queen bee in brood. Hence, preferred single grafting and using 1 and/or 2 day old lavae will be more authentic for abbreviating pre-ovipsition period. Grafting method and interaction grafting method x larvae age had no effect on emergency weight (mg) of queen bee but affection of larvae age on the same characteristic was found important (p<0.05). Emergency weight (mg) of queen bee was found between from 114 mg to 238 mg in group A1, from 128 mg to 207 mg in group A2.
a, b Means with no common superscript in a column within a parameter differ (P< 0.05). 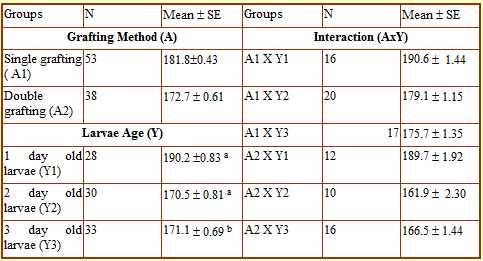 Queen bees reared by 1 and 2 day old larvae had higher (p<0.05) emergency weight than reared by 3 old day larvae. Woyke [12] reported that queen bees grafted from one and two day old larvae and weighed at emergence ranged in weight between 0.156-0.201g. Queen weights at emergency obtained from this present research were similar to that reported by Rawash, at all., [13] and Nelson and Gary [14]. It can be inferred from these result that weight at emergency is creditable criteria be used for selection of virgin queens. Queen bee rearer is suggested by the finding from the present study to use young larvae and single grafting instead of double grafting, causing waste time, raise labor and lose larvae. 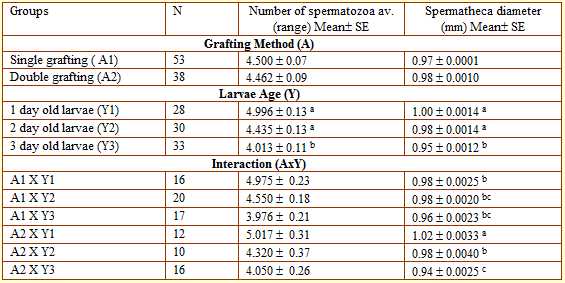 Table 3. The average number of spermatozoa and spermatheca diameter of queen bees

Acknowledgements The authors grateful to Ataturk University for supplying a great working environment and, also to members of Rothenbuhler Honey Bee Lab to scientific review for this study .