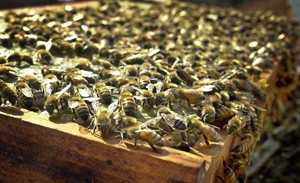 San Francisco Chronicle
Saturday, March 10, 2007
With reports coming in about a scourge affecting honeybees, researchers are launching a drive to find the cause of the destruction. The reasons for rapid colony collapse are not clear. Old diseases, parasites and new diseases are being looked at.

Over the past 100 or so years, beekeepers have experienced colony losses from bacterial agents (foulbrood), mites (varroa and tracheal) and other parasites and pathogens. Beekeepers have dealt with these problems by using antibiotics, miticides or integrated pest management.

While losses, particularly in overwintering, are a chronic condition, most beekeepers have learned to limit their losses by staying on top of new advice from entomologists. Unlike the more common problems, this new die-off has been virtually instantaneous throughout the country, not spreading at the slower pace of conventional classical disease.

As an interested beekeeper with some background in biology, I think it might be fruitful to investigate the role of genetically modified or transgenic farm crops. Although we are assured by nearly every bit of research that these manipulations of the crop genome are safe for both human consumption and the environment, looking more closely at what is involved here might raise questions about those assumptions.

The most commonly transplanted segment of transgenic DNA involves genes from a well-known bacterium, bacillus thuringiensis (Bt), which has been used for decades by farmers and gardeners to control butterflies that damage cole crops such as cabbage and broccoli. Instead of the bacterial solution being sprayed on the plant, where it is eaten by the target insect, the genes that contain the insecticidal traits are incorporated into the genome of the farm crop. As the transformed plant grows, these Bt genes are replicated along with the plant genes so that each cell contains its own poison pill that kills the target insect.

In the case of field corn, these insects are stem- and root-borers, lepidopterans (butterflies) that, in their larval stage, dine on some region of the corn plant, ingesting the bacterial gene, which eventually causes a crystallization effect in the guts of the borer larvae, thus killing them.

What is not generally known to the public is that Bt variants are available that also target coleopterans (beetles) and dipterids (flies and mosquitoes). We are assured that the bee family, hymenopterans, is not affected.

That there is Bt in beehives is not a question. Beekeepers spray Bt under hive lids sometimes to control the wax moth, an insect whose larval forms produce messy webs on honey. Canadian beekeepers have detected the disappearance of the wax moth in untreated hives, apparently a result of worker bees foraging in fields of transgenic canola plants.

Bees forage heavily on corn flowers to obtain pollen for the rearing of young broods, and these pollen grains also contain the Bt gene of the parent plant, because they are present in the cells from which pollen forms.

Is it not possible that while there is no lethal effect directly to the new bees, there might be some sublethal effect, such as immune suppression, acting as a slow killer?

The planting of transgenic corn and soybean has increased exponentially, according to statistics from farm states. Tens of millions of acres of transgenic crops are allowing Bt genes to move off crop fields.

A quick and easy way to get an approximate answer would be to make a comparison of colony losses of bees from regions where no genetically modified crops are grown, and to put test hives in areas where modern farming practices are so distant from the hives that the foraging worker bees would have no exposure to them.

Given that nearly every bite of food that we eat has a pollinator, the seriousness of this emerging problem could dwarf all previous food disruptions.
John McDonald