Georgia, birthplace of the Caucasian bee (2003) 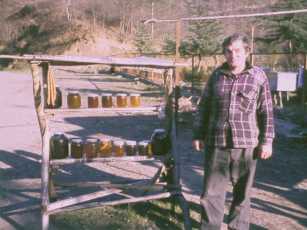 An independent country since the breaking-up of the Soviet Union, Georgia has 5.5 million inhabitants with a land area of 69700 km2 -that is twice the size of Belgium-. Located south of the Caucasus mountains and north of the Transcaucasus mountain range, it has common borders with Turkey and Armenia in the south, Russia, Dakestan and Cheshnia in the north, and Azerbaijan in the east. In the west, the beaches of the Black Sea give a bathing touch to the mainly mountainous former Colchidia. 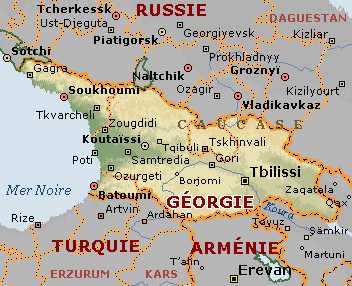 A people of poetsThe history of Georgian beekeeping is intimately linked with the history of its people. Traces of that activity are to be found in the remotest written works. Long before Jesus Christ, the Greeks were already used to going to Georgia to chase the numerous pheasants. So as to ensure the preservation of game on their way back, they would immerse the meat into honey-filled amphoras bought locally. Between the 12th and the 15th century, the famous medical treaty Karabadini bi Zara Fanaskerteli was the reference book (see the bibliography at the end of the article). It recommended using the produce of the hive to cure the toughest pathologies. That is why bee-wax -pollen stored in the cells by the bees and which has undergone a fermentation process- is called 'scheo', a specific Georgian term. It shows the very deep age-old relationship between the Georgian people and bees and their produce.

Today, bees are still part of everyday life. The Georgians, who regard themselves as a people of poets, say that 'There is a poet in every Georgian person, and there are two poets in every Georgian poet'. For them, bees are close to God. This short contemporary poem by S.N. dedicated to bees shows it:

Bee you are a living God working intelligently constantly looking for something loading your mind you always fly back to your hive. if my words can really be of interest for you I would like to tell you something: what is the most important thing for you out of honey for men and a bee-wax candle for God.

Now, only bee-wax candles are burned in Orthodoxian churches. Candle sellers are a common sight at the metro entrance of Tbilissi (see photo below). Beekeepers, who come (si mode de transport indifférent) /walk (si à pied) / down from their mountainous valleys specially to sell bee-wax in the capital city, also sculpt candles with talent. 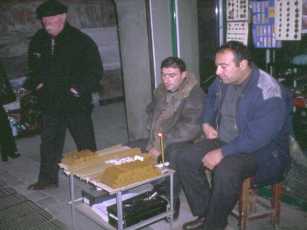 Selling candles at the entrance of the Metro

Immersion of the 'geja' From 1978 onwards, varroa has decimated 90% of the bee population. That tragic situation in beekeeping caused the disappearance of the traditional hives called 'geja'. These horizontal hives were made from tree trunk sections -1 m long and about 0.30 m in diameter. Split in two lengthways, they were hollowed out. A 5 cm piece of wood was left to ensure a fine insulation during severe winters. The entrance was set at one of the ends. The harvest was done simply by sacrifying a few colonies of the hive after having drowned the bees. Once the fastening pegs had been taken away, the hive was opened and the harvest of honeycombs and wax could take place.

Long live Lenin! In 1919, Lenin, who was aware of the major role played by bees in their environment, decided that beekeepers would be exempted from taxation. That legislation still applies today, to the good fortune of beekeepers. Some observations made by local beekeepers and which have been described in the national review of beekeeping deserve special attention. For instance, during the earthquake in December 1989 in Spitak, a town situated in Armenia near the Georgian border, beekeepers noticed that bees had deserted their hives one hour before the tragic seism, which took place late in the morning. Some local beekeepers explain that striking behaviour by the fact that the Caucasian bee, unlike other strains, lives naturally into rock cracks instead of hollow trees or varied other shelters. That deserting behaviour would be a natural selection for swarms, making bees able to avoid a certain death during earthquakes, numerous in that region.

Another observation from Russia offers an alternative in the fight against varroa present in swarms captured in the wild or near hives. Indeed, knowing that bees are resistant for a short period to a lack of oxygen, but not their parasites, Russian beekeepers immerse the bare swarm into water at 15-25°C. for about 5 minutes, claiming that bees can bear that immersion for more than 20 minutes. Thus, varroas fall down from the swarm which is rid of its parasites and then set into a hive body.

As for Dr. Ivane N., a geophysicist at the Tbilissi Institute, and a well-informed beekeeper and breeder of queens, his research work led for more than 40 years allows him to say that in Georgia, the amount of honey harvested is linked to the nuclear activity of the sun. When solar patches are important, that is for cyclic periods of 7 years, the average harvest is low. On the reverse, during low solar activity years, with little eruption at the surface of the sun, the harvest happens to be excellent. All that with probability ratings superior to 9.

Exported to over 40 countries
The massive Beekeeping Institute in the suburbs of Tbilissi ticks over, because money is lacking. Actually, the country now faces a deep recession. Created before the advent of the Soviet Regime, that research and popularization centre, with Dr. B.T. now at its head, still employs some 50 people. The renowned Pr. I.R., who was awarded the gold medal at the Apimondia symposium of Bucarest in 1965, still carefully observes his mini-hives (see below). His scientific research carried out on the characters and performances of the Caucasian bee is still reference work. 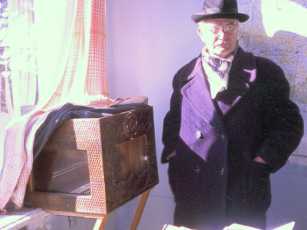 Pr. I. R. beside a mini-hive for scientific observations

In 1877, the Russian beekeeper A. Boutlerov stressed the financial interest and the good temper of that bee. The first professional queen rearing farms can be traced back to 1886 in the Sokhumi region. Some beekeepers had several thousands of hives. In 1906, F. Benton, who traveled all around the world in search for an ideal bee brought back some of those queens to the United States. D.L. Andgouladze mentions in 1971 that 'Georgia has natural conditions which are not propicious to bee production, such as a diversified relief, climatic variations: lasting droughts during nectar gathering periods, along with sudden rainfalls and gales. These harsh climatic conditions have selected, through the ages, the good qualities which turned the so-called grey bee into a renowned bee. That is also the reason why the Georgian bee, when set in relatively stable climatic conditions and with an abundence of melliferous resources, has a much higher productivity than other races.'

These days, the Caucasian bee (apis mellifera caucasica) is sought after worldwide for its many good qualities. Particularly docile and remarkably well adapted to long and harsh winters, it is exported to over 40 countries. Less prolific than the Italian bee (apis lellifera ligustica), it does not offer the same opportunities for brood production for instance. However, bred as a pure race or cross-bred with other ones, the Caucasian bee gathers a very respectable crop of honey. It has a 7.2mm tongue, that is the longest of all races. The black bee (amm), has a 6.3 mm tongue. So, the grey bee performs better in the flows with very deep corollas such as acacia and lucerne. A very hardy bee, it can work under drizzle in temperatures as cold as 10°C. Originating in the north-west of Georgia, in the deep valleys of Mingrelia, the southern slopes of the Caucasus mountains, it makes for its common name of grey bee of the mountains. Not far away from that area, one can notice the influence of the Iranian bee (amr). More yellow than the Caucasian bee, it also shows more aggressiveness. That yellow bee can be found almost pure in the eastern part of the country, towards the Caspian sea or Armenia. 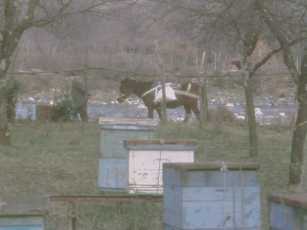 Locust trees /Acacia or white goldThe melliferous resources of Georgia vary depending on altitude. They are quite representative of the flora of a temperate climate. The country is located at about the same latitude as the South of France. The most common flows are acacia (rpa) and chesnut trees (cs). Then, depending on the region, there are mainly lucerne, lime trees, fruit trees, buckwheat, et?(amorpha fructicosa), etc... which give excellent many flowers honey. The average production yield for the sedentary hive is of around 45 kgs for 2 harvests a year. The selling price is quite high, given the local purchasing power, at retail prices of 25 to 30 f/kg. Only a few dozens of tonnes of acacia honey are exported to Turkey at a price of 14F/kg. The fight against varroa is currently led with a yearly teatment of amitraz at non-laying months from November to February. The country seems to be spared by American foulbrood, and there are only a few cases of European foulbrood. 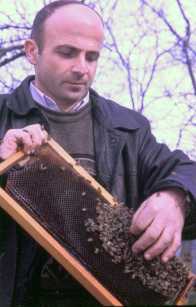 Together with their honey production, beekeepers tend to diversify more and more their activity by breeding queens for exportation. The main criterion of selection is that of acacia honey production (Fig.4). The breeding techniques are quite similar to those of other countries, with the constant care to preserve the good temper of that unique bee. The mating nuclei, usually made of 4 compartments, are populated in early May. The vertical finishers are loaded with a maximum of some forty royal cells.

As a consequence of the current economic crisis -with a rate of unemployment reaching 90% in Tbilissi-, beekeeping experiences a high rate of growth. That is why some former professors of economy or computing engineers have become queen breeders. Although statistics are difficult to set, according to the Tbilissi Beekeeping Institute, more than 1500 families would live on the produce of their hives. With an average of 120 bee colonies per farm, and knowing the beekeeping potential of the country, the margin for growth is still very important. Dadant 10-frame hives make up more than 80% of the total number, the rest are D.Root 12-frame hives along with some Layens with local dimensions.

Geographically close to Western Europe, and with its renowned bees, Georgia has the potential to become one of the main providers of queens and package bees in years to come. The human potential is there, but the country still has to recover from the serious economic crisis it is going through.