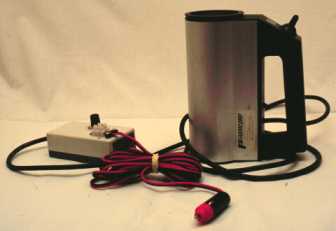 Abstract
The most serious disease in apiculture is varroasis caused by the mite Varroa jacobsoni Oudemans. Immediate diagnosis of varroasis is not possible, especially in spring time when bee colonies are purchased. A new method was developed to detect ecto- and endoparasites of honey bees focussing on the varroa mite (n=129 separate examinations). The method incorporates washing and centrifugal force to separate mites from bees in a closed container. Four rotational speeds: 6342, 5718, 5076 and 4752 rpm, were tested, for 10, 30 and 60 seconds, with two concentrations of detergent solution. Both live and frozen bees were examined. The high detergent level as well as the highest speed were significantly better (p<0.05) than the low detergent and lower speeds respectively. The duration of the centrifugation is not critical. The qualitative detection efficiency (detection % of all infested samples) of the method is 100% (n= 93) when the infestation level is >3 mites/100 bees , and at 1 mite/100 bees the efficiency is >85% (i.e. 13 positive detection out of 15 samples). The quantitative detection efficiency (% of mite individuals detected in a sample) of the method under optimum conditions is >90% when the infestation level is >3 mites/100 bees. The detection rate when using frozen bees was significantly better (p<0.05) than when live bees were used.

The mites attach to the adult bee between the abdominal segments or between body regions (head, thorax, abdomen) and are therefore difficult to detect (Ritter 1981, Shimanuki and Knox 1991). Generally, varroa remains undetected up to three or four years after a hive first becomes infested. Clinical symptoms become apparent when several thousand mites are present in a colony (Ritter 1981, Robaux 1988).

One of the field methods to detect the mite is to uncap the brood cells and remove the pupae with forceps, a sharp knife or capping scratcher (De Jong 1979, USDA 1987, Szabo 1989). Throughout the year, the ether-roll method is used in the quick field diagnosis of varroa. Some 450-1000 live bees are collected into a wide mouth jar (Ellis et al.1988, Herbert et al.1989, USDA 1987, Gruszka 1988) by using a short burst of ether. The bees are then rotated in a jar for a few seconds and the mites adhere to the surface of the jar. The average detection efficiency of ether roll is 35% quantitatively (individual mites detected in a sample) (Herbert et al.1989). and 12.5% qualitatively (detection rate of all infested samples) (Ellis et al.1988). However, the latter value would have been much higher in a survey with higher infestation levels. Since smoke is used in the apiary, the high flammability of ether is a safety concern when using the ether roll method. Brood examination is a tedious process and is not possible in the absence of a capped brood (Herbert et al.1989). When colonies are sold in spring, beekeepers and apiary inspectors need an accurate technique for the rapid detection of varroa. The decline of colony population affects the practicality of taking brood and/or substantial adult bee samples for ether rolling. The main objective of these studies was to develop a highly efficient method of detecting varroa mite on a small sample (100-150) of adult bees. Another objective was to determine the practicality under field conditions.

Materials and methods
A new device has been designed and developed over four years by the Department of Applied Zoology of the University of Helsinki. The prototype device was built in Finland by Farmcomp Ltd. (figure 1). Varroa mite detection research was conducted at the Agriculture Research Centre in Jokioinen, Finland. The device was tested in the U.S.A. for the detection of Acarapis woodi, in cooperation with the U.S. Department of Agriculture, Iowa State University and Dadant and Sons Inc. However, the detection method for the internal mite is still under investigation and is out of the scope of this article.

Figure 1. The Langstroth comb behind the prototype device is for the size comparison

The method incorporates centrifugal force to dissociate varroa mites from bees in a closed container. Bees and a shaking solution were placed in a rotating chamber. Attention was given to the consistency of the load (bees and liquid) during experimentation to have a steady rotational speed, consequently a constant centifugal force. Four rotational speeds (6342, 5718, 5076 and 4752 rpm.) were examined for 10, 30 and 60 seconds. In a preliminary research the cheapest and most efficient liquid was found to be a solution of detergent which has no hazardous side effects. Washing detergent (Leijona) and water was used. Adding the detergent to a container of water avoids unwanted foam. No annoying foam was formed during the analysis of the samples. Two concentrations of detergent solution were investigated: low (one ml in three liters ) and high (one ml in one liter).

Sample collection
Bees were sampled from two apiaries in Partalansaari, southeastern Finland. A pair of samples (each 0.5 deciliter . mean 117 bees) were collected from 36 bee colonies every three weeks from May to August. Equal numbers of colonies of Apis mellifera mellifera, A. mellifera carnica and A. mellifera ligustica were used in this investigation. Collected bee samples were divided randomly into two groups for live (117±23 0 ±SD range 61-171) and frozen bee (118±25 range 60- 165) analysis. Bees were shaken from a comb into a container; then 0.5 dl of bees were measured and placed in a plastic bag. The live bee samples were analysed within fifteen minutes. At the end of the day the frozen bee samples were carried to a laboratory and frozen at approximately -20EC. The samples were defrosted at room temperature prior to examination.

Figure 2. The inner structure of  the closed rotational chamber

Initial examination
A bee chamber within the rotational chamber consisted of pillars, 3 mm apart, to filter the bees (figure 2). The solution of water and detergent, without bees, (150 ml) was measured by the use of the rotational chamber and poured into the plastic bag, over a sample of bees (frozen or live). The solution and bees were then poured back into the rotational chamber and deposited into the centrifugal device. The remaining mites, if any in the bag, were also added to the chamber with a paint brush. By having a wet cluster of bees it becomes easier to place them into the rotational chamber. Research demands accuracy, however in practice bees can be brushed directly into the chamber. The motor for rotating the sample can be run by an automobile 12 volt battery. After centrifuging the cylinder at various rotational speeds and times, mites were counted on the bottom of the transparent rotational chamber and bees were removed. The removed bees were placed in a rotary shaker for 30 minutes in 70% ethanol (USDA 1987), a method which removes 100% of the mites (De Jong et al.1982). The bees and any fallen mites were then washed under a shower of tap water over 2 sieve screens (3mm and 0.5mm in pore-size) for 2?3 minutes (Fakhimzadeh 1993). The mites and the bees were then counted (n=129 separate examinations).

Experimental design and statistical methods Experiment 1. The effect of concentration of the detergent solutions
This was 2 3 factorial design with fixed effects of detergent concentration (low and high), speed 6342 and 5718 rpm for 30 and 60 seconds. Two levels of each factor were chosen based on previous experiments giving a total of 8 treatment combinations. Samples of live bees n= 26 (0.5 dl .100.6±12.3 0 ±SD ranging 76-120 bees) were randomly assigned to each treatment and inspected for mites blindly (the examiner not knowing the history of a sample), 4?6 replications were used.
The bees were infested with 13.9±14.1 0 ±SD ranging 0.9-49.6 mites per hundred bees and 8 samples had < 3% mite infestation.

Experiment 2. The use of frozen bees vs. live bees
This was also a factorial design with fixed effects. The factors were freezing/not freezing, speeds 5718, 5076 and 4752 rpm and times 10, 30 and 60 seconds, giving a total of 18 treatments (n=103 out of which 28 samples had <3% infestation). The low concentration of the detergent solution was used. Randomization and inspection of the samples were as in experiment 1. The analyses of both experiments were accomplished with SAS (Statistical Associates Software) General Linear Modelling (GLM ?procedure). Both experiments were conducted simultaneously. 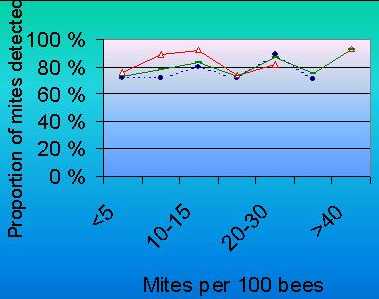 Figure 3. The quantitative detection efficiency based on experiment 2 (n=100 separate examinations ). Frozen bees, live bees and combined data are shown by triangle, circle and dash respectively. Categorical number of observations of infestations <5 to >40 were 43, 24, 13, 9, 3, 5, 3, respectively. Notice that the optimum speed (6342 rpm) and high concentration of detergent solution were not used in this experiment 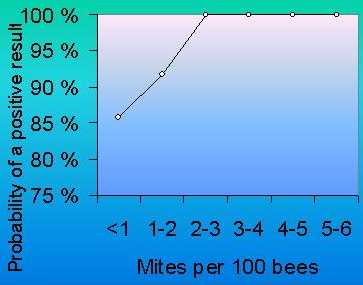 Figure 4. The qualitative detection efficiency based on both experiments (n=65 separate examinations) The categorical observations were 15, 13, 13, 11, 8, 5, respectively

The effect of detergent concentration is quite clear (figure 5) and becomes obvious considering the washing and centrifuging mechanisms that are utilized. 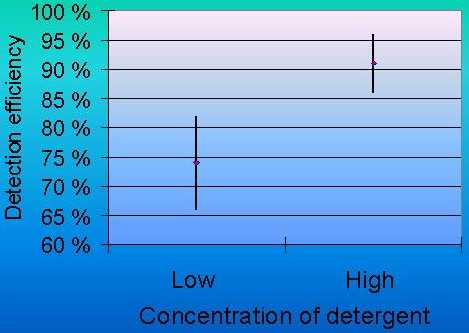 Figure 5. The effect of detergent concentration on the mite detection (quantitative). Means ±SE. N=12 in each concentration 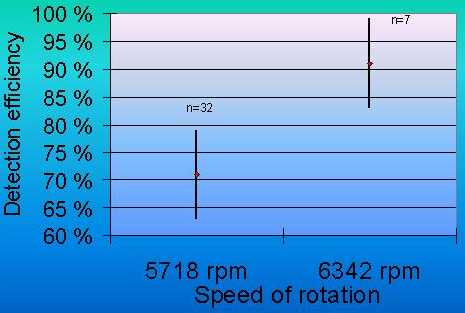 Figure 6. The effect of speed on the mite detection (quantitative). Means ± SE. N= 32 and 7 for lower and higher speed respectively

Freezing seemed to have no effect but this was in fact due to the large variation; it rose mainly from low infestation samples and could be minimized by excluding samples of <3% infestation level. Again a logical explanation to the freezing effect can be found that freezing at -20E C may dislodge the mites in the period before actual freezing occurs (figure 7). 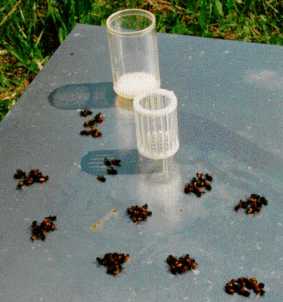 Figure 7. The effect of freezing the bees on the mite detection (quantitative). Means ± SE. N= 50 for live bees, 25 for frozen bees

The duration of centrifugation is not critical; even 10 seconds of rotation seems to be enough especially when optimal levels of other factors are chosen. The maximum velocity, causing the highest centrifugal force, was obtained in less than ten seconds. The mites are either dislodged from the bees (e.g. when on top of the bees' thorax) with the maximum centrifugal force, or remain in a safer position between the bees' segments. Since the duration of centrifugation does not increase the force, it is logical that after 10 seconds the duration does not play any significant role.