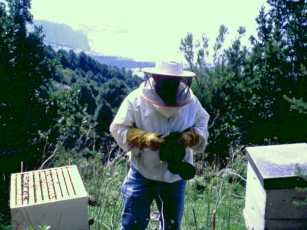 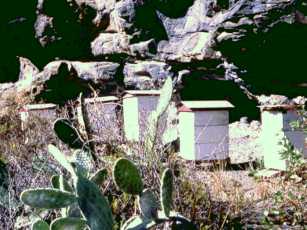 Isla bonita...
La Palma, the most western island of the archipelago of the Canarias, has a land area of 706 km². It is situated 450 kms away from the African coasts ashore the Western Sahara and about 70 kms from the nearest island. Spain has been present there since the end of the 15th century. A volcanic island, it has a 2483m high summit where the famous astrophysics observatory called "Roque de los Muchachos" is located. That fertile land has all sorts of climates depending on the height and position. So you can eat roasted chesnuts and garden mangoes; excellent wine is produced, along with 150 000 tons of bananas. Each island of the archipelago of the Canarias Island ( Tenerife, Gran Canaria, Lanzarote, La Gomera, El Hierro, Fuerteventura) is a unique ecosystem where beekeeping practice has developed in its own way.

Honey with a unique taste...
About 80 000 inhabitants share that small patch of heavenly earth in the middle of the Atlantic Ocean. There are almost 80 beekeepers for a total of more than 2000 hives. A scattered habitat, along with particularly uneven spots have made transhumance difficult. As a consequence, most apiaries are sedentary ones. Some apiaries are moved from June to August, but only in the eastern part of the island, near Mazo and Fuencaliente where taginaste (echium) flower. Like anywhere else in the world, beekeepers in La Palma Island are quite imaginative. Guillermo is the perfect example with his apiary fitted with a real cableway for hives and supers. Powered by an electric winch, the metallic cable goes down the lava slope so as carry all the equipment during harvests and transhumance ( see: fig 1). A few traditional apiaries are still exploited. These old vertical or horizontal hives, called "corchos", are made from hollowed out palmtree trunks or simply from 4 planks, like for Gines’s apiary. Today, Langstroth type hives with supers are used, unlike in Spain where you can find Layens type hives. The average honey yield amounts to about 20 kg/hive but can reach much higher levels in high-performance running conditions. 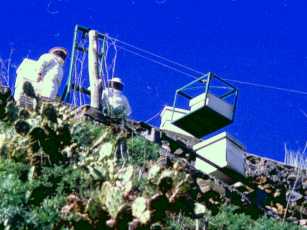 Guillermo and his cableway for hives 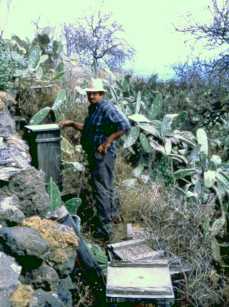 Gines in the traditional apiary

A myriad of melliferous plants grow betweenformer lava flows. Ranking second behind Hawai for the number and diversity of its endemic plants, La Palma Island delights botanists. Indeed, many of our pot plants and pleasure garden plants bear a scientific name composed of ... canariensis. At the origin of this wild flowers honey with a unique taste, there are mainly indigenous flowers from the island which belong to families of Echium (teginaste, borage) the Euphorbia ( see: fig 3) the Senecio klenia (verode), the Chamaecytus (tagaste), the Aconium sp. (bejeque), the Szonchus (cerrajon), the Leguminosae (Adenocarpus viscosus)... Then, come all the species which have been introduced by the Spanish since the end of the 15th century. The main melliferous and polliniferous resources range from the chesnut tree (Castanea sativa) to the Japanese medlar tree (Eriobotrya japonica), the eucalyptus (E. globulus, E. ficifolia), the almond tree, the acacia (mimosacea), bramble bush, citrus tree and so on...... The fact that honeys from La Palma Island more often than not rank among the finest ones in Spanish tasting contests owes much to that tremendous "cocktail" of flowers. There is no trouble for selling the production: beekeepers sell half of it to local people, who somewhat regard honey as a medicine, the other half is sold to tourits.

Ecotype or stabilized cross-breeding.
Before the arrival of the Spanish, native people called Los Guanches, used to live on these isles. Their origin remains much debated. Quite the same goes for bees. In 1975, F.Ruttner was the first to describe the bees from the Canarias. That morphological survey of the local breed, which was carried out only on Tenerife and Grand Canaria, has shown its kinship with apis mellifera iberica. It is believed that the breed had been introduced from the peninsula by the first settlers. More recently, a morphological study made by the section of animal biology of the University of Cordoba, along with DNA tests done by P.De La Rua and cols, ( 1998) have brought to the fore the existence of two distinct varieties of bees.

The bees from La Palma would have a purer genetic code than those analysed on the islands of Tenerife, Hierro, La Gomera and Grand Canaria. In recent years, beekeepers on these islands have indeed imported breeds like carnica, ligustica, caucasica and the Buckfast cross-breed. Above all, these unregulated introductions have caused the propagation of diseases affecting bees and broods. The very marked aggressiveness due to those unregulated cross-breedings, makes beekeepers’ work uneasy. Living together with neighbours and tourists can be stingy. However, the island of La Palma, with its quite pure bee, still has the great privilege of being free from varroa and foul brood. Only acariosis and few viruses have caused the disappearance of 20% of the bee population a few years ago. Today, this sanitary problem seems to have been solved thanks to two yearly treatements with menthol. If the rules which have been set by the administration are enforced, such a situation can last for some more years. 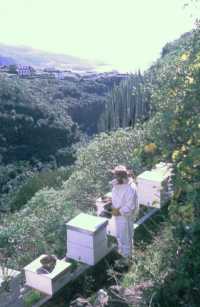 The Langstroth hive
prefered to the Layens hive

The black bee from La Palma is not very aggressive and does not rob. It has the same gathering instinct as the black European Apis mellifera mellifera. Above all, it has a very strong cleaning behaviour. According to the usual test of the dead brood after deep-freeze, the ability of these bees to spot and that get rid of that brood is very acute. Only 12 h. are enough, and that goes for hives which have not been selected yet, whereas it usually takes 48 h. for a 90% cleaning with “yellow” cross-breeds. Moreover, that local bee is well-adapted to its environment, to flowering cycles and to the climate.

An exciting project...
From that unique situation in Europe, Canarian authorities have taken measures to preserve and protect the bee from La Palma. First, it is obviously forbidden to introduce bees, along with used beekeeping equipment and hive products which can be carriers of brood diseases. These measures come from a European directive already enforced in 1998 for the Island of Laslo, in north of Denmark. A conservatory of the local bee a.m.mellifera has been set successfully. Brussels has had to give a riling so as to forbid transhumance an that 114 km2 island. Beekeepers of the continent were used to moving about their hives of inbred bees to produce calluna honey.

As for La Palma, the scheme for the preservation and improvement of the local bee aims at replacing queens from the few colonies which have some degree of hybridization. Let us remind that the local purpose is to produce more honey with a gentler bee.

With the agreement of beekeepers and with their help, 400 samples of workers are undergoing DNA analyses at the Basque University of Bilbao. The results will allow to spot the purest colonies. They will be put together in an area selected for its melliferous resources and its density in hives to ease the saturation of the area with drones from selected hives. In order to avoid any risk of inbreeding, rearing will be done with the biggest number of colonies. That research work, which has already started and will take several years to be completed, consists of two phases:

That ambitious programme can succeed only with the consent of all the beekeepers. Bees already represent a valuable resource for the local economy of the island. But if that heritage conservation project is a successe, the consequences should prove massive. Straight away with honey production and in an indirect way with the pollination of avocado, pear trees, citrus, and the wild flora as a whole. Moreover, beekeepers from the rest of the world will always need stocks of pure breeds for their cross-breedings.

Today, La Palma can remain protected against the influence of other breeds if the measures mentioned above are implemented. The island is also safe from varroase and foul brood. Let us hope that men will be wise enough to keep that bee as pure as possible.