Summary
Background Conventional advice on immediate treatment of honey bee stings has emphasized that the sting should be scraped off, never pinched. The morphology of the sting suggested no basis for this, and such advice is likely to slow down removal of the sting 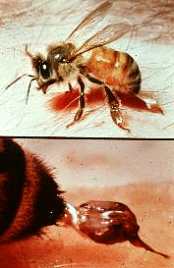 Methods
The response to honey bee stings was assayed with a measurement of the size of the resulting sting weal. Injection of known quantities of venom demonstrated that this is a good measure of envenomization.

Findings
Weal size, and thus envenomization, increased as the time from stinging to removal of the sting increased, even within a few seconds. There was no difference in the response to stings which were scraped or pinched off after two seconds.

Interpretation
These data suggest that advice to patients on the immediate treatment of bee stings should emphasize quick removal, without concern regarding the method of removal.

Introduction
Bee stings are a common, painful, and rarely deadly injury (10% of people in a poll in the UK reported having been stung, with 0.7% of these seeking medical attention, Riches 1989; bee stings cause about 17 deaths per year in the USA, Schmidt 1992) Most literature regarding the immediate treatment of bee stings states that the sting should be scraped off, perhaps with a knife blade, credit card, or fingernail, and never plucked out by pinching with forceps or one's fingers (Riches 1982, Goddard 1993, Mosbach 1995) An examination of the structure of the bee sting made us doubt the soundness of this advice, particularly since scraping off a sting with a tool involves a delay relative to simply brushing or pinching it off. We performed the assays of this study to test the relative envenomization resulting from these two means of removing stings, and the effect of short delays in sting removal. 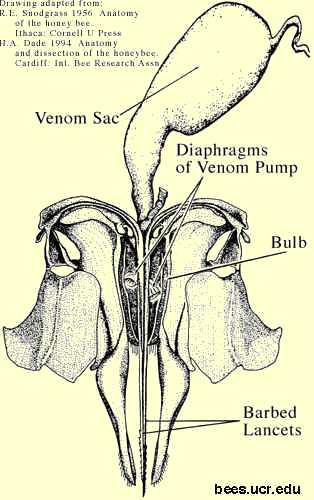 The sting detaches from the body of a honey bee (Apis mellifera) after stinging (Fig. 1), in contrast to other stinging insects (Mulfinger et al. 1992). It takes with it the entire distal segment of the bee's abdomen, along with a nerve ganglion, various muscles, a venom sac, and the end of the bees digestive tract (Snodgrass 1956). The sting itself (Fig. 2) consists of two lancets with recurved barbs on the outer aspect of their distal end, held in grooves on the stylet.

Muscular movements of the detached sting, coordinated by the attached nerve ganglion, move the stylets alternately. The barbs provide one way traction, so that the sting continues to work itself deeper into the flesh. A valve and piston on the proximal ends of the moving lancets (like an old-fashioned water pump) pumps venom from the venom sac between the stylet and the lancets, and through an opening near the tip into the wound.

Methods
Envenomization assay
To assay the venom injected by a bee sting, we measured the area of the weal raised on our own forearms after stinging. In preliminary observations, the raised, relatively white weal achieved its maximum size approximately 10 minutes after stinging. This assay apparently provides a good relative measure of envenomization (see below). Measurements were blind: the observer was unaware of the treatment being measured. Ten minutes after each sting was administered, this observer measured the maximum and minimum diameters of the raised portion of the weal, using a digital caliper.

To determine if weal size was a valid assay of envenomization, we measured the size of weals resulting from an intracutaneous injection of 5µl of water solution containing doses of 1, 3, 10, 30, or 100 µg of dried bee venom. (Bee stings contain about 150µg dry weight of venom, of which only a small fraction is typically injected). With a microliter syringe and a 26 gauge needle we injected five concentrations of venom two times each in one subject (PKV).

Administration of stings
All stings were self-administered. The area to be stung was cleaned with alcohol. We collected a worker honey bee as she flew from her hive, grasped her by her wings, and pressed her against the skin of the inside of the subject's forearm until she stung.

Time series
This series compared the effect of small delays in removing stings to the effects of different methods of removal in the next series. We marked five numbered sites on each forearm of the subject and assigned five treatments to the sites on each arm in a randomized-block design. Each treatment consisted of leaving the sting in the arm a variable number of seconds, and then scraping it out with the edge of a credit card. We employed treatments of 0.5 sec, 1 sec, 2 sec, 4 sec and 8 sec. The observer, unaware of which treatment corresponded to each site, measured the sting weal for each sting 10 min after it was administered. We collected data on 5 five-sting series on each arm of one subject (PKV).

Removal-method series
This series compared the envenomization resulting from removal of bee stings by scraping and pinching. A subject administered stings as above, then removed the sting from his arm after 2 seconds by either scraping it off with the edge of a credit card, or by pinching the sting between his thumb and forefinger and pulling it out. This process was then repeated on the subject's other arm, with the other treatment. Which arm received which treatment was determined randomly, and was unknown to the observer. We collected data on 10 stings of each treatment from each of two subjects (PKV and RSV).

Analysis
We calculated the area of the usually elliptical weals; A = d1 d2 / 4. We performed regressions of weal area on injected venom dose and on time to removal, and an analysis of variance comparing responses at five (proximal to distal) sites and between arms. We analyzed the removal method series with an analysis of variance on the weal area, with factors of removal method, subject, and right or left arm nested within subjects.

Fig. 2. Means and standard errors of response to stings as a function of the
time from stinging to removal, and linear regression line for these data

Fig. 3. Means and standard errors of the response to
stings removed by pinching or scraping them off.

In a small number of cases, the scrape treatment resulted in breaking the sting lancets from the rest of the sting, with the lancets remaining in the subject's flesh, which did not occur with pinching, but this did not lead to an increased weal reaction.

Discussion
We showed that the sting weal bioassay we used is well correlated with the quantity of venom received by the subject. The increase in weal area with increasing time between sting and removal reflects continuing pumping of venom into the flesh of the subject by the detached sting, and it illustrates the significance of even short delays in removing the sting. There was not a significant effect of the location of the sting, but the response at 2 seconds was lower, though not significantly so, in the time series than in the removal method (t-test, t28 = 0.909, P = 0.12), possibly due to the the presence of multiple stings at once in the time series.

The method of removal does not affect the quantity of venom received by the subject. This result contrasts sharply with conventional advice regarding the immediate treatment of bee stings. Probably this advice derives from a misunderstanding of the structure and function of honey bee stings. The sting continues to inject venom, but it is a valve system, not contraction or compression of the venom sac (whose wall contains no muscle) which pumps the venom.

The data here illustrate that the advice that patients should be concerned about how bee stings are removed is counterproductive in terms of minimizing envenomization. The method of removal is irrelevant, but even slight delays in removal caused by concerns over performing it correctly (or getting out a knife blade or credit card) are likely to increase the dose of venom received. The advice should be changed to simply emphasize that the sting should be removed, and as quickly as possible.

Advice on bee sting treatment should not overlook that the most important response to stings from bees defending their nests should be to get away from the vicinity of the nest. There is an alarm pheromone emitted at the base of a honey bee's sting (Free 1987), which makes other bees more likely to sting, and aids them in locating the victim. This is particularly important with Africanized bees, as they are more likely to respond to the release of alarm pheromone with large numbers of stings. Therefore getting to safety is more important than removing stings immediately, but stings should removed as soon as possible once a person is away from stinging bees.

Acknowledgments
We are grateful to Susan Trainor for assistance in observations, and to Vespa Laboratories for providing the dried venom we used. Tim Visscher and anonymous reviewers gave constructive comments on the manuscript, and the National Science Foundation (IBN 9120639) provided financial support.