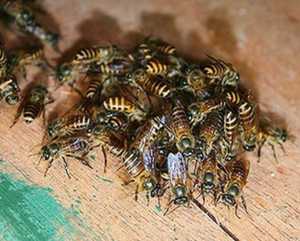 Unstoppable ... Asian honey bees
February 28, 2011
A SPECIES of bee, regarded as the cane toad of the insect world, has invaded Australia and may seriously disrupt the nation's farming industry.

The Asian honey bee, Apis cerana, is expanding a foothold of territory it established around Cairns in 2007, and the federal government has heeded advice that it is now unstoppable.

The foreign bees often carry the Varroa genus of parasitic mites, which can ravage bee populations by spreading deformities and sickness among them.

Australia's beekeepers are angry at what they see as the meek surrender of the authorities in the face of the foreign bees. Up to $4 billion worth of food crops rely on local bee pollination, according to research last year, and this could be seriously disrupted, the beekeepers say.

Protesting apiarists from across the country will head to Parliament House in Canberra this week to try to persuade the government to spend more money to fight the problem.

The decision to accept that the bee cannot be eradicated sparked a divisive debate within the Commonwealth Department of Agriculture, Fisheries and Forestry.

''The … view is that it is no longer technically feasible to achieve eradication, although consensus was not reached,'' a department communique said.

It said the invasive bee's ability to breed rapidly, hitch long-distance rides on trucks and trains, and the inability of bee hunters to locate and destroy all nests meant it was impossible to wipe them out.

The department said funding for the bee eradication would continue only until the end of next month.

Australia had been successfully guarded for many years against Asian honey bee incursion by the use of ''sentinel'' hives positioned on land by sea ports. If the hives showed any signs of Varroa infection, the authorities swung into action.

But in May 2007, Asian honey bees found inside the mast of a yacht in Cairns could not be contained and they have since been found nesting in tree hollows, under the eaves of houses, in letterboxes, and on boats.