The Future of Bees and Honey Production in Arab Countries (2001)

The Future of Bees and Honey Production in Arab Countries
Moustafa A. EL-Shehawy

Introduction
There is no doubt that Apiculture, is still primitive in most of the Arabic countrie, and that a great number of the honeybee races in Arab countries tends to violence and paucity of production. In the same time, we find that the Arabic country is rich in agriculture resources, blossoms and plants, that are prevalent in plains, valleys, and mountains. We have Nabk trees in Tohama and Aseer’s valleys, and camphor trees in Kuwait. We have various plants in mountains and pans of Jordan and Lebanon. We have citrus and cotton in Egypt, thyme in Libya and thorny trees in Yemen... etc.

All these plants and others produce different kinds of honey, but it is not used properly. For example, the opulent grasslands in Libya have 50.000 colony of bees, while Egypt alone has 200,0000 colonies. Hence. we say that there is a need to raise apiculture in certain Arab countries, so, prosperity will prevail all over the Arab countries.

Aims of the study
This study aims to present data and statistical information which are the basis of planning and developing the studies and research to improve the methods of apiculture and the production of honey. Consequently the proper investment in this field will be accomplished.

Production of Honey
According to the statistics of the ( A O A D ) , the production of honey in the Arabic country in 1988 was 13224.9 tons. And according to the statistics of the researcher, it is now 27943.9 tons with addition that equals 111%. In the Arab countries, Egypt comes first in producing honey, since it produces 16000 tons of honey yearly. That equals 57% of the total production in the Arab countries. Second to Egypt, there is Morocco which produces 4500 tons of honey. Then Yemen with 1706 tons, then Tunisia with 1445 tons. 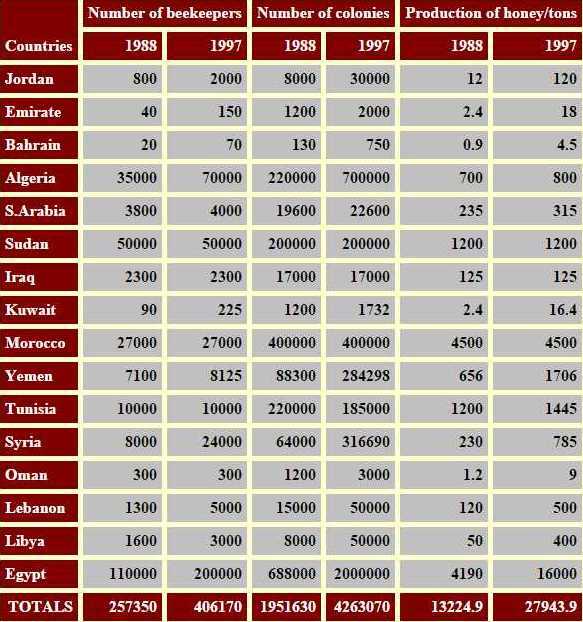 In table number (2), we see that the production of in Kuwait was 2.4 tons from 1200 bee hive, at the rate of 2k per hive. The production 1997, is 16.4 tons from 1732 hive, at the rate of 9.5k per hive. We notice that the average of the hive production, has rised fourfold and a half, despite the increase of the hive’ number. This is the result of using the new techniques in apiculture in Kuwait, and the concern in forestation, and tree - planting which avail the beset is also the result of holding courses tour citizens in order to encourage and train them on modern process of apiculture.

The available consumption of honey
From table number three (3), we note that, the average of the annual consumption of honey which is available for an individual is 116 gam. as the available quantities of honey for citizens in the Arabian countries are very small. for example, in Emirates, the available consumption in 1997 is 8 gam per citizen. In El-Bahrain 7g.m, and in Kuwait 9 gam, while in Oman 4g.m and In Lebanon 166 gam. This drives these countries to import large quantities of honey to make up the required needs, specially with the prevalent awareness among citizens about the importance of honey in treatment. There are researches about the benefit of honey for curing Breast cancer, others about eye and skin diseases, brunets, cough, and also the function of bee products in leasing the fats’ average in blood and honey’s effect onto confusion of blood pressure during pregnancy. The Arabian citizen, prefers honey that is produced in Arabian countries, like Seder Honey in Yemen or Saudi Arabia. which is famous for its medical and remedial benefits, but this doesn’t prevent honey’s import from other countries. For example, in 1993, Lebanon imported 342 tons. This cost 171000 American dollars, while Yemen and Saudi Arabia export for Gulf countries specially Kuwait and Emirates. As Yemen exports 293 tons that equals 15 : 20 % of the total financial value of the hard currency in this country.

The average of the annual consumption of honey that is available for an individual is 116 gam. This is not (as others believe) the actual average of consumption per individual. Because the actual consumption depends on the accessible quantities of honey either produced or exported. That’s in addition to the current prices which encourage citizens to buy honey, since the high price hinders the increase of consumption in many Arabian countries. Beside, of people use honey as medicine only, and in many Arabian countries, there isn’t the habit of eating honey daily, except some popular meals in Yemen and Saudi Arabia.

In order to promote apiculture in the Arabic countries, we propose the following: