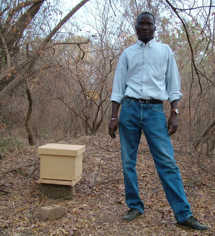 “These bees are constitutionally obnoxious, one does not get anywhere with them”. These are the ways most people who have come close to African bees have described their findings after a visit to a hive originating from this continent.

In 1980 Professor Roch Domerego meets with beekeepers from Rwanda and reviews at length their traditional knowledge of beekeeping. He also meets with monks who keep bees in the European Langstroth hives. After a few months of various trials, he comes to realize that a key concept is missing to this beekeeping that endeavors to domesticate the African bee. Then he decides to go deep into the woods to observe the bees in their natural habitat. He is quite impressed by the fact that their behavior, in their free state, is very different from what he knew so far. 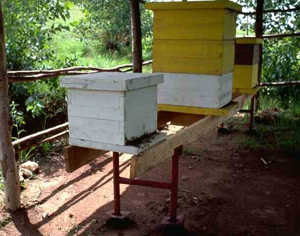 When coming close to a wild swarm, he notices that the bees are normally aggressive, quite a major difference from their usual frightening behavior. He can observe their activity, do counts, measure precisely the dimension of their nest and, most important, observe how different their biorhythm was from that of the European bees: their foraging hours, their times of inactivity… All this reflects the adaptation of their rhythm to that of their plant world. This work in the field lasted four months, time needed to collect enough information to achieve statistical significance. 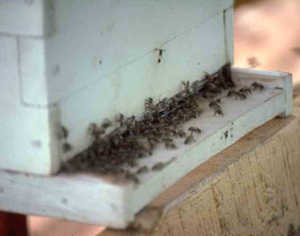 He sets the basics of a new hive corresponding to their natural habitat and calls it “the Andansonian”. Its sizes and structure are the result of his research. You can find attached the drawings allowing you to build this type of hive. Together with his carpenter companion who worked with him on the project, they study the most economical ways to build this hive. The outcome is a series of slats of one single dimension that allows the construction of a hive super solid enough for the demands of the climate and of the manipulations. Each side of the super is constructed with four boards glued together in the customary fashion (white glue, with pressure during drying time…).

With this method one obtains panels that are far more resistant than plain wood, which tends to yield to climate variations. Each side is built in alternating the positions of the boards in such a way to produce mortises. The sides built this way will the be assembled, glued and nailed to create the super. A minimum amount of wood and a maximum degree of strength define the criteria of sustainable development.

Test apiaries have been set in Rwanda demonstrating that African bees developed in these hive like Europeans do in the Langstroth : 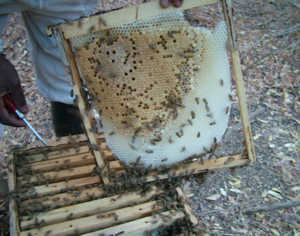 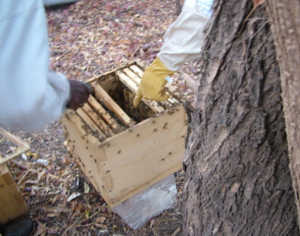 In 2005, at the time of the start of the Apitherapy project in Burkina Faso, two experimental apiaries totaling 20 Adansonian hives were set up under the leadership of Professor Théodore Cherbuliez. Dr. Moussa Savadogo is in charge of the building and the running of these colonies. Here is his testimonial after a few months.

“During my visit of Saturday 30 April, just at the beginning of the season, I had the great pleasure to observe an abundance of eggs in the recently divided colonies. I saw the queens. In one of the hives the brood was placed in the second super. The egg pattern is beautiful. And most colonies’ aggressivity could be well handled. That weekend I marked 4 queens. I was very moved and proud to be able to find, then catch and mark African queens. This is the first time that this could be done in Burkina Faso, and of course, this was only possible thanks to the Adansonian hive”.

Click on the thumbnails to get the big shots.