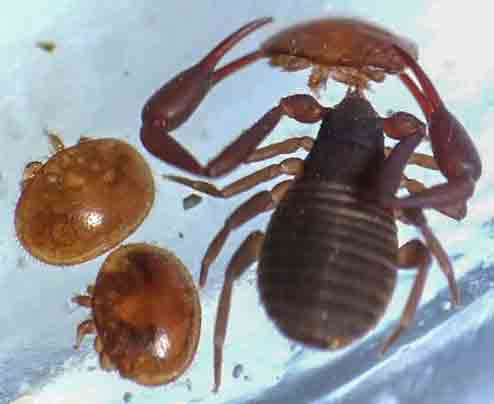 Behind an unassuming grey door in a first-floor corridor of the Otto Hahn School in Hamburg, a student bee farm is hidden away. It's a converted classroom, complete with a transparent beehive that lets pupils observe the insects' behaviour. Assorted beekeeping equipment is stowed in every available space.

Around a dozen students come here regularly to work on research projects they're doing as part of the national German science contest, the Young Researchers Competition. But, they're not working on bees.

Instead, they examine book scorpions: small dark brown arachnids that are up to five millimetres long. They're named for their large pincers, which jut out from their bodies and make them resemble scorpions.

The students want to find our how they can encourage book scorpions to permanently settle inside beehives. The hope is that they can help fight one of the worst enemies of bees: the varroa mite.

"We have a problem with the varroa mite", explains biology teacher and hobby scientist, Torben Schiffer, who is supervising the pupils. "All the beehives are infected and more bees are dying than can be raised by the beekeepers."

Many scientists believe that the varroa mite is one of the main causes for the recent mass deaths of bee populations around the world, a phenomenon known as colony collapse disorder. The varroa is a small parasite, also known as the vampire mite. It sucks blood from bees and their larvae. In doing so, it transports bacteria, fungus and pathogens to the bees.

Experts estimate that Central Europe now has twenty-five percent fewer bees in comparison to thirty years ago, while in the US populations have declined by around a third.

Bees are important for maintaining biodiversity, especially in their role pollinating flowering crops. Losing them could result in a shortage of fruit and vegetables as well as threaten crops that are important for feeding livestock, such as alfalfa for instance.

Up until now, beekeepers have used chemicals such as formic acid in their fight against the varroa mite. But Torben Schiffer believes that the chemicals harm the bees themselves.

Watching the book scorpions at work through a microscope is like observing a gruesome battle. The animals quickly approach the varroa mites, grab them with their large pincers and paralyse them with poison. They then drain their prey with their mandibles while already creeping towards their next victim at the same time.

Back in 1951 the Austrian zoologist, Max Beier, documented symbiotic relationships between bees and book scorpions from which both organisms would benefit. The bees are cleaned of parasites while the book scorpions have plenty to feed on. Nowadays however, few beekeepers know about the small brown animals.

Torben Schiffer believes that the arachnids were driven out by chemicals originally designed to fight varroa mites. Another problem, he believes, is that many beekeepers use beehives made from plastic, which don't provide a suitable habitat. "You've got to have wooden hives in order to have a micro-fauna," Schiffer told DW. "The babies of the book scorpions need to have very small prey animals and they are found in natural materials like wood or hay."

However, some experts view Schiffer's findings with scepticism. They question whether book scorpions really are a viable answer to the varroa problem. "It's very impressive to see how the book scorpion attacks varroa mites under lab conditions", said Peter Rosenkranz, an expert on the varroa mite at the University of Hohenheim. "But in order to make a real impact, it won't be sufficient to kill off a few individual mites." Between spring and autumn varroa mite populations can grow by a factor of fifty or more, Rosenkranz explains.

"The mites have to be put under permanent pressure," he told DW. "Based on the existing data, I doubt that book scorpions would be able to do this."

According to Peter Rosenkranz, independent scientific research on the book scorpion is needed to determine its effectiveness against varroa infestations. 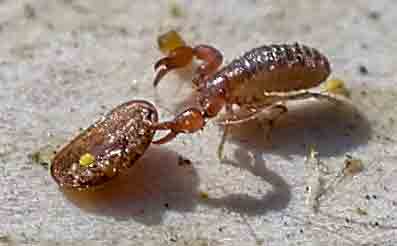 Still, Torben Schiffer is determined to continue with his own research. He has set up a group called the Beenature project, which researches the breeding habits, application and beehive compatibility of the animal. Schiffer also wants to start a global conversation among beekeepers in order to gradually re-establish awareness of the book scorpion.

At the same time he's urging beekeepers to apply more sustainable methods to their trade in order to strengthen the bees themselves: "These days, bees are kept in plastic hives", he said. "They're treated with acid, chemistry and neurotoxins. And they only get sugar in order to survive the wintertime because the beekeepers take out all the honey."

Schiffer, who is also a beekeeper in his free time, likens his methods to going back in time.

"We must leave the bees their honey and build them hives made out of wood," he said. "We must look at what the bees need, and not what the humans want."