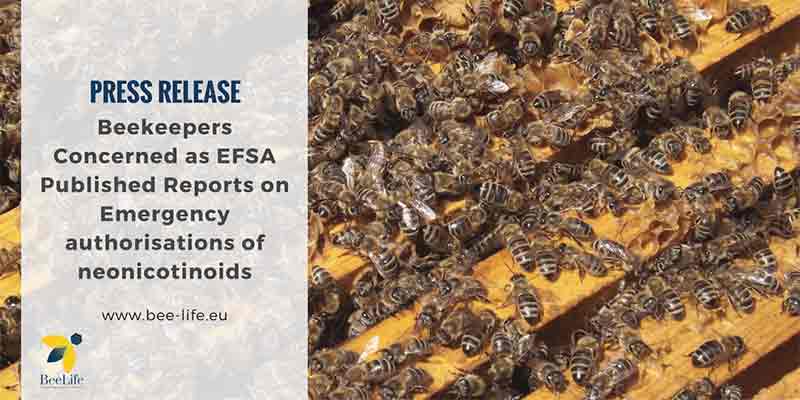 The European Food Safety Authority (EFSA) published today several reports on the emergency authorisations granted in 2017 by some EU countries on the three suspended neonicotinoids. Reports include a worrying outcome: several EU countries continue to use suspended neonicotinoids in bee attractive crops, without even fulfilling the procedure required by authorities. It is a concerning demonstration of misadministration. Furthermore, the reports show that EFSA is far from being able to provide pertinent advice on the subject.

On the 15 September 2017, the European Commission mandated the EFSA to provide technical assistance to assess the emergency authorisations for the use of clothianidin, imidacloprid and thiamethoxam in crops that attract bees and other pollinators. The following countries granted such authorisations: Romania, Bulgaria, Estonia, Finland, Latvia, Lithuania and Hungary. In its mandate, the Commission requested the EFSA “to assess whether the granting of these emergency authorisations and their wide scope were necessary because of a danger which could not be contained by any other reasonable means".

It was the first time that the Commission requested such assistance, even though these Member States have granted emergency authorisations yearly, ever since restrictions came into force in 2013. Meanwhile, audits performed by the Health and Food Audits and Analysis (former Food and Veterinary Office, FVO) of the European Commission had shown that countries like Romania, which continue to provide derogations year after year, had not fulfilled the requirements to issue derogations.
The reports exhibit worrying issues:

- Some member states like Bulgaria did not provide the requested data to justify the emergency authorisations. It is a recurrent issue, as evidenced by previous annual emergency authorisations (See Bee Emergency Call report). There is no doubt that this is a grave case of misadministration from the national ministries and the European Commission, who allowed it.
- The EFSA, expert on pesticide risk assessment and not necessarily on agronomy and agriculture, examines each of the proposed alternatives in a country by country basis, without considering that the same alternatives are efficient across countries. In its reports, it has found that there are available alternatives in Hungary, yet, there is no discussion of the expansion of such alternatives in other territories.
- The EFSA, with their methodology, fail to integrate knowledge from related public agencies like the Health and Food Audits and Analysis, which in this case could have been of great assistance. However, they integrated a clear Conflict of Interest by the Member States granting these authorisations.

Indeed, the question should be addressed to DG Santé. Why did they not request their agencies to work together on this issue? The Commission requested the EFSA to audit the pertinence of these authorisations. Due to its unresponsiveness to such request, we currently wasted 10 months on producing reports that have no chance of solving the risks that the bees and pollinators are facing in these countries. They neither provide an external view on the authorisations nor alternatives. Still, they may produce arguments for the Commission to take Member States to court. Hence, perhaps a positive outcome may be seen in three or four years. In the meantime, the beekeeping sector and biodiversity of these countries will have already suffered irreparable damages.
Francesco Panella, President of BeeLife, stated: "We saw today that the EFSA has no expertise in making the agricultural model more sustainable. Our colleagues from countries where governments massively grant derogations are witnessing the same losses we observed in the nineties. However, agricultural methods have evolved enough not to allow these losses again".

EFSA's evaluation evidenced the high efficacy of neonicotinoids due to their unparalleled toxicity. However, such characteristic is as well the source of their danger, which brings along the need to instate a search for alternatives. Member States are obliged to develop research programs to find alternatives after issuing emergency authorisations, but no results are available to date. In fact, projects to find alternatives should have started since 2014, after introducing the first derogations, but in 2018 there is still no notice.